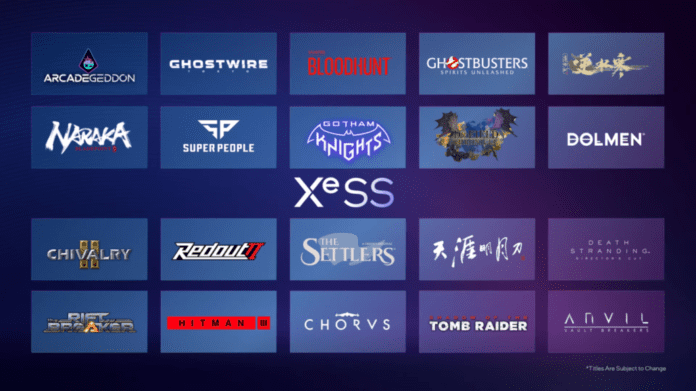 In Intel XeSS, there are two integrated binaries; the first enables XMX acceleration on Intel Arc GPUs, and the second uses the DP4a instructions common on contemporary graphics cards. The second mode is planned to work with more recent graphics cards, including Intel’s 11th Gen graphics, AMD Vega 20, Navi 1X, and NVIDIA Pascal. It appears that the majority of publications are concentrating on the performance the device gives on existing cards and rival GPUs since reviewers have only been able to get their hands on the Arc A770 & Arc A750 graphics cards so far, and their reviews won’t be published until next week.

Standard, DLSS, and XeSS rendering using NVIDIA’s GeForce RTX 2080 Ti graphics card have been compared by PCGamer. With the “Quality” level of XeSS, the GPU provides 112 frames per second. This result is slower than NVIDIA’s DLSS project, in comparison.

Although Intel XeSS works quite well with every graphics card, it may not always result in a noticeable speed boost.

Some of the evaluated graphics cards showed a slight improvement in performance. This shift in performance could be caused by DP4a instructions, which must be natively supported by all graphics cards but are instead emulated using 24-bit integers, which explains why AMD’s RX Vega and Navi 10 series perform worse with Intel’s new upscaler. It’s strange that the “6GB VRAM limit” is the problem for a game that was released four years ago.

In the majority of cases, Intel XeSS DP4a did not improve the performance of any of the games evaluated. As the XeSS technology is still in its infancy, the company has a long way to go before it can address problems and improve performance. Particularly with the soon-to-be-released Arc A7 GPUs, Intel might give its Arc XMX algorithm priority. Fortunately for Intel, there is only one API and SDK, so development would essentially take place simultaneously.

Previous article
Good Bad Girl: Sony LIV has confirmed the Official Release Date of the Series
Next article
India-W starts on a positive note in Asia Cup 2022 by defeating Sri Lanka-W by 41 runs