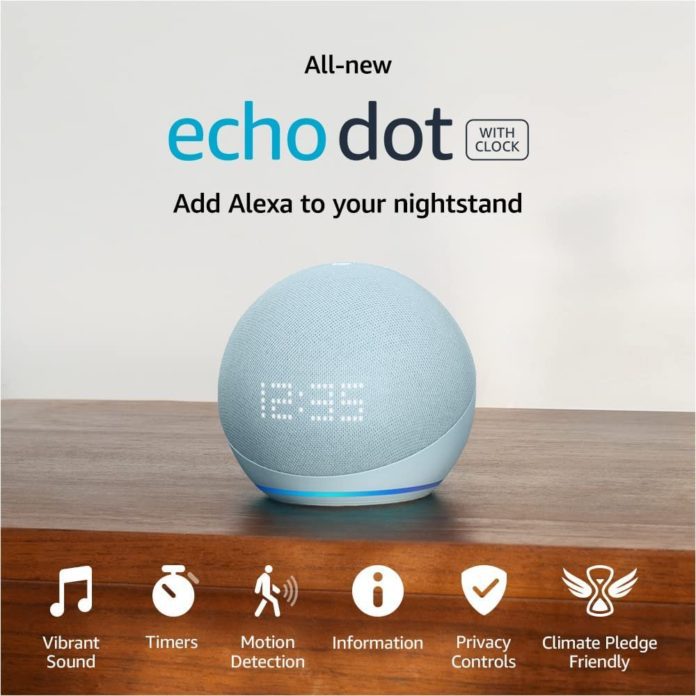 Echo speakers didn’t get an upgrade in 2021’s event, though we did get a new line of Echo Show smart displays. In 2022, however, Amazon is flaunting a fresh lineup of Echo devices.

The brand-new 5th Generation Echo Dot brings more powerful audio to Amazon’s most popular smart speaker. Amazon hadn’t released a new version of the Echo Dot in two years since the fourth-generation Echo Dot launched in September 2020. While the 5th Gen Echo Dot is the same size as the previous generation, it features a completely redesigned internal structure for double the bass output and crisper audio.

On top of that, the Echo Clock with Dot uses high-density dot technology. You can now see the time, the currently playing artist, song name, upcoming calendar events, and it’s even bright enough to see in direct sunlight that may be coming through your window.

The speakers will also get accelerometers and temperature sensors, with the accelerometer allowing for more tap gestures (such as tapping the top of the speaker to play or resume music) while the temperature sensor could let Alexa turn on a fan when the room gets too hot. The firth-gen Echo Dot is slated to arrive Oct. 20 for $49.99, while the new Echo Dot with Clock will sell for $59.99 when it lands next month.

And with that, let’s move on to the price list. The Echo Dot without the Clock costs $49.99, while the Echo Dot with the Clock and the Echo Dot Kids each costs $59.99. As of today, all three can be pre-ordered in marketplaces around the world. In addition, Amazon has also introduced the Echo Auto, a smart speaker designed specifically for use in vehicles, at a price of $54.99.

Previous article
PSG owners in talks to buy Espanyol in hopes of harming Barcelona
Next article
Logitech G Cloud: Here are all the Games the new Handheld offers

Amazon formally announces the start of 1st Round of Layoffs