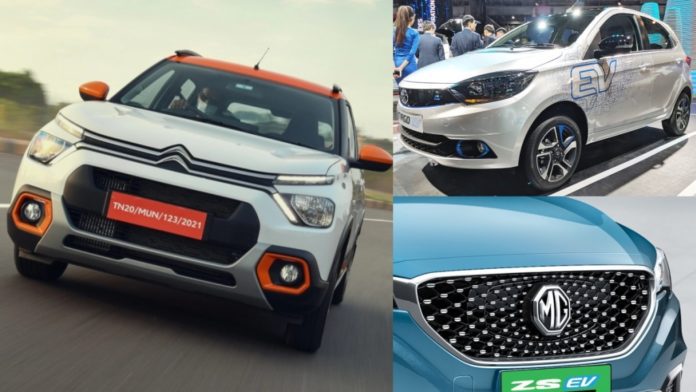 Electric cars are gradually becoming popular in the Indian market. While most EVs have currently priced above Rs 10 lakh, things might soon get interesting in the affordable segment too.

Tata Motors is set to unveil yet another electric vehicle, the Tiago EV, on 28 September 2022. The brand has also posted teaser images on its social media handles, revealing a few features of the electric hatchback. The teaser images show that it will get cruise control, connected car features with smartwatch compatibility, leatherette seat covers, re-gen modes, and fast charging capability. Being an electric vehicle, this new Tiago is expected to feature a closed-off grille, reshaped bumpers, and new alloy wheels.

While the powertrain details of the upcoming Tiago EV are unavailable, it is expected to share the Tigor EV’s 26kWh battery pack. This battery pack along with the permanent magnet synchronous motor – which generates 74bhp and 170Nm of torque – comes with an ARAI-certified range of 306km.

While much remains the same as on other GSEV platform-based vehicles, including the two-door body style, expect MG to tweak specs and equipment for India substantially. Company sources say that the E230 will be modified and adapted for Indian conditions. In particular, the air con and battery thermal management system will be beefed up. Also, the Air EV will wear an MG badge and receive a new name for India.

While official details are yet to be revealed, we understand the India-bound MG EV will have a 2,010mm wheelbase and will only stretch the tape to around 2.9 metres in length, making the EV about 400mm shorter than the Maruti Alto. MG India sees this small footprint as a virtue, especially in crowded cities where it is difficult to manoeuvre and park. The car will have a battery pack capacity of around 20kWh to 25kWh, which should offer a real-world driving range of 150km. Power output would stand at 40hp.

It looks like after long-range electric SUVs, car manufacturers are now interested in making small electric cars that are more suitable for city use. Coming back to Citroen, the C3 electric car seen here in the picture has a camouflaged fender. The picture that has surfaced online does not show the whole car.

There is a possibility that the charging port for the car could have been positioned on the fender just like what we saw in the Mahindra XUV400. It looks like Citroen might not be making many changes to the exterior design of the car. Citroen C3 is an all-new hatchback that was developed specifically to suit Indian conditions.

Other than the C3 electric, Citroen is also working on other models for our market. They recently launched the facelift for Citroen C5 Aircoss which was introduced in the market last year. It is also the flagship model from the French carmaker in India.

More images of the 2024 Ola EV Car have surfaced online