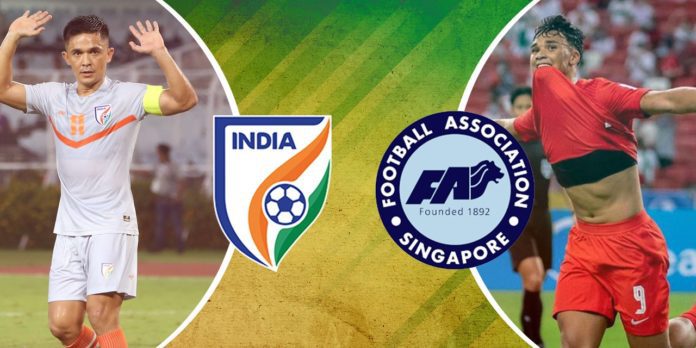 Indian men’s football team and Singapore played out a 1-1 draw in their first FIFA international friendly in the Hung Thinh Friendly Football Tournament at the Thong Nhat Stadium in the Ho Chi Minh City in Vietnam on Saturday.

India began the match against Singapore determined to extend their winning streaks. With the recent memory of AIFF being banned by FIFA and then the unbanning, Igor Stimac and his boys were desperate to prove their worth on the pitch. India started the game looking to dominate the midfield, but the Singapore side was resolute in their defense.

“So many things we could have done better. We missed a lot of chances. Without being too harsh on ourselves, we have to move on. Don’t want to give any excuse for the weather. It is just the way we played. The ground was beautiful, the weather was different but nice. It was about how we played and we have to get better. We have watched them (Vietnam) play against Singapore and they are a good side. We have to be much better when we play them”, Sunil Chettri Said.

Ikshan Fandi took a free kick that hit the Indian human wall. The ball deflects off Jeakson Singh to beat Gurpreet Singh to go into the net. Despite the best efforts from the Indian goalie, Gurpreet failed to keep the ball away as Singapore started to celebrate a well-deserved goal.

During the drinks break, stern words from Igor Stimac worked wonders. 7 minutes after conceding, India equalized, and it was Ashique Kurunian who redeemed himself for his earlier mistake. Out of a counterattack, Sunil Chhetri gave a delightful through ball to Ashqiue who slotted it past the Singapore goalie. The two sides headed into the break with nothing to separate them.

The second half began where India left it at the end of the first half. Yet again both sides started to assert their dominance over the other. With every passing minute, the game started to become more and more physical with both sides eager to win the dominance in the midfield. Singapore had to make a couple of injury changes and thereby reported to a defensive approach. India got quite a few opportunities to go ahead into the match but failed to convert their chances.

Previous article
GPUs are getting steep price cut after the successful Ethereum Merge
Next article
IND-W vs ENG-W 3rd ODI: India won the match by 16 runs

FIFA U-17 Women’s World Cup 2022: Quarterfinal hopes over for India after 0-3 defeat against Morocco

India vs Nepal: Lineup and how to watch the SAFF Championship 2021 final match live in India?