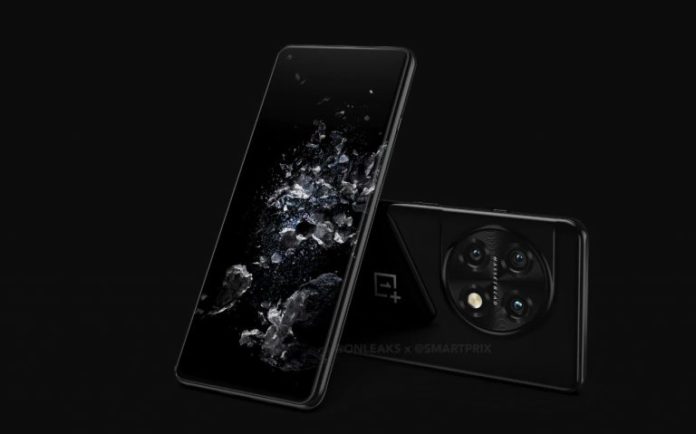 The OnePlus 11 Pro originally appeared in online renderings earlier this month. With the help of reputable leaker Onleaks, also known as Steve Hemmerstoffer. The OnePlus 10 Pro, which made its debut earlier this year, will be replaced by the company’s upcoming flagship model.

It has got a 6.7-inch AMOLED screen with a 120Hz refresh rate, a punch-hole cutout in the upper left corner, and a QHD+ resolution. The display’s edges may be curved, but that is not yet understood. It is thought that the device would have a fingerprint scanner built into the display.

A 50MP primary sensor, a 48MP ultra-wide-angle lens, and a 32MP 2x telephoto lens make up the triple rear camera configuration on the OnePlus 11 Pro. There will be a front-facing 16MP selfie camera. There is little question that the future product will include Hasselblad camera technology.

The undisclosed Snapdragon 8 Gen 2 CPU is said to be the brains behind the OnePlus 11 Pro. This is consistent with a story from the Chinese source Digital Chat Station that claims OnePlus is developing a flagship device with the aforementioned processor.

In addition, 5G, WiFi-6E, Bluetooth 5.2, Dolby Atmos, and a USB-C connector are anticipated for the OnePlus 11 Pro. Most likely, Android 13 OS will come pre-installed on the smartphone.

The OnePlus 11 Pro is rumored to have a revamped camera module with a boundary in the style of a half-pill that extends from the side frame to the center of the rear panel, according to leaked renders. Three sensors and an LED flash are housed in a spherical camera bump on it. The alert slider, which was absent from the OnePlus 10R and 10T, will also be present on the 11 Pro.

Previous articleFIFA 23: Here’s how you can use the FUT 23 Web App to build your Ultimate Team
Next article43-inch 4K UHD TVs you must need to check out | Great Indian Festival 2022