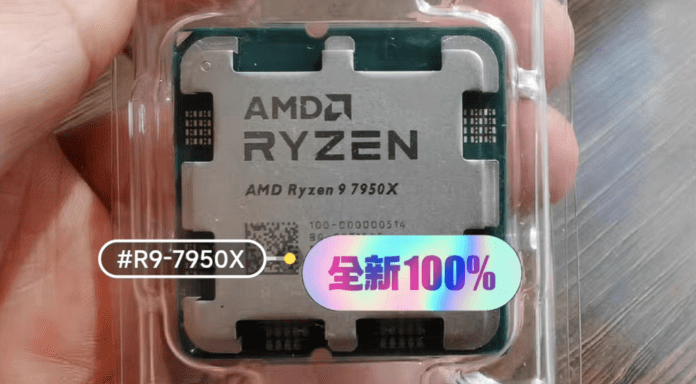 The AMD Ryzen 7000 CPUs will go on sale in a week, but the flagship Ryzen 9 7950X is already available in China. The AMD Ryzen 9 7950X was advertised on Goofish, a Chinese third-party retail site where customers may also resell used goods. The chip that has been advertised on the website is not an engineering sample like the one that was previously disclosed, but rather a retail sample. The CPU seen carries the OPN code “100-000000514” and features the same IHS and contact pads as other CPU renders for the Zen 4 range.

According to reports, the CPU is completely functional and functions flawlessly on the AM5 platform, just like any other AMD Ryzen 7000 retail chip.

Pricing-wise, the lister is seeking 5999 RMB ($856), which is a steep amount given that the retail chip, which will be made available a week later, costs $699 US (MSRP). As a result, the wisest course of action is for our readers to refrain from purchasing this chip and instead wait a week to purchase a chip at MSRP. Additionally, purchasing the stated chip would exclude you from receiving any kind of warranty.

Its robust 16 cores and 32 threads from the previous two generations are still present in the AMD Ryzen 9 7950X. The processor will have a base frequency of an amazing 4.5 GHz and a maximum boost frequency of 5.7 GHz (5.85 GHz F-Max), which should make it 200 MHz faster than Intel’s Alder Lake Core i9-12900KS, which has a single-core boost frequency of 5.5 GHz. The CPU is capable of reaching a maximum frequency of 5.85 GHz, however this will necessitate significant cooling.

The flagship will cost $699 US, making it slightly more expensive than the Core i9-12900K while providing a noticeable performance boost of up to +57% in multi-threading applications like Chaos V-Ray and doing so with up to 47% improved energy efficiency.

When it comes to gaming performance, the AMD Ryzen 9 7950X will outperform the Core i9-12900K by up to 35% in titles like Shadow of the Tomb Raider.

Additionally, AMD demonstrated how well the AMD Ryzen 9 7950X compared to the Intel Core i9-12900K in both gaming and content creation. In gaming benchmarks, the CPU varied from -1% to +23% quicker, while in creation workloads, it varied from +36 to +62% faster. Launch day for the AMD Ryzen 9 7950X, the remainder of the Ryzen 7000 CPU family, and the AM5 platform is set for September 27.