Poly Sync 10 vs Poly Sync 20: Differences that will help to make the decision 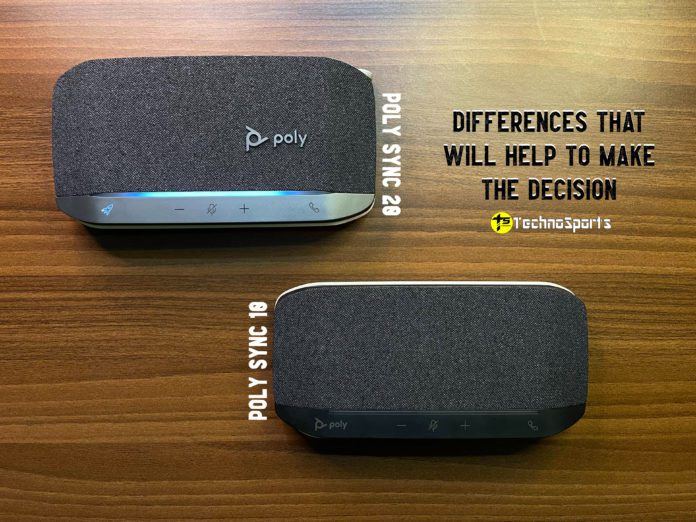 Poly is one of the few companies that is providing complete solutions for the office communication environment along with the hybrid and work-from-home working models for so many years now. Post the covid outbreak, the last two models were highly adopted and everyone looked for high quality solutions. So, obviously, the name “Poly” pops up. From its offerings, we already reviewed the Voyager 4320 UC headset, Studio P5 webcam, and recently the Sync 20+ speakerphone.

For the Poly Sync 20+, the plus symbol ‘+’ indicates the presence of a BT600 Adapter in the box. While reviewing the Sync 20+, I also got its predecessor, the Sync 10 to spot all the changes the brand has made. So, finally, here we are will all the list. Let’s check all the points one by one.

Connectivity – The Most Noticeable shift

The most noticeable difference from the specs sheet is the wireless connectivity integration. Where the Poly Sync 10 has only wired connectivity option, the Sync 20 inherits the same and also integrates Bluetooth 5.1 option. This obviously gives the user the freedom to move with the speaker phone if required. Additionally, need not to worry about the battery. When drained out, connecting the unit with your device will take less than a minute with the USB-A long cable. For Sync 10, there will be a Type-C to USB-A adapter to connect the speaker to your smartphone.

Speaker – On Paper vs Practical

On paper, the Sync 10 has a bigger 50-mm audio speaker installed. On the other hand, there is a downgrade for Sync 20. We are getting a 40-mm speaker driver inside. So, technically, Sync 10 should provide a louder output. But here the tuning part played very well.

Practically, the experience is exactly the opposite. The 40-mm speaker produces better and louder output than the 50-mm of the Sync 10. However, both are more than sufficient to take any official call.

To make it clear for you, I can compare both the devices, Sync 10 and Sync 20, with two pizzas. The Sync 10 pizza has a bigger base, but the Sync 20 pizza has more toppings to make it tastier.

The overall audio package of Sync 20 has more details and balances all the sound components better. Not only for calls but while playing any media also the difference is noticeable.

The Sync 10 houses a two-microphone array to sync you with your callee, whereas Sync 20 has a three-microphone array. Poly claims for pick-up range of 5ft and 7ft respectively. The same noise and echo reduction technology are there for both models.

While testing, a noisy fan was in action in the room and an audio story playing in the next room. The microphone arrays worked almost similar when I was close to the devices during the calls. The devices picked my voice clearly and delivered the same. The quality was nearly equal when I talked around 3ft away from the speakers. The changes were noticeable when I stand around 5ft and 7ft away. At 5ft distance, the Sync 20 captured my words better where Sync 10 struggles a bit. The three-array setup started struggling from 7ft and two-array almost stopped working.

To conclude the voice pickup, both devices provide super support and enough for a decent room size. But the Sync 20 can back you up if you went a bit far sometimes by mistake.

When coming to the noise part, the suppression in Sync 20 works better and can easily spot the difference when comparing. Both cut the fan noise with equal foort, but my callee heard the audio story clearer while connected to the Sync 10.

Design – Good to Have

The Poly Sync 20 is bigger and heavier than the Sync 10. Obviously, its for the integration of the wireless connectivity and other additional features. The top part is wrapped with a fabric material in both the devices, but the bar with touch controls is metal for the successor; its plastic for the Sync 10. Other than that, there are minor changes for the branding placement. We are getting IP64 dust and water resistance certification for both models.

To be honest, there are no deal breaker in the design part, according to me.

Call cut/receive, mute/unmute, volume up and down – these buttons are common for both Sync 10 and Sync 20 speakers. These are touch enabled, so will get sound notification instade of the touch feeling. Poly added an extra customisable button to the Sync 20 with a rocket symbol. You can set any action from the given list in the Poly Lens application. It might feel useful in some cases, but in Sync 10 you hardly miss this button.

Due to the wireless connectivity integration, Sync 20 has a power button and a dedicated Bluetooth button to enable it wirelessly. Other than that, there is an USB-A port to charge your mobile or other accessories. All these are missing for Sync 10, which is natural though.

The Poly Lens PC application support is there through wich we can do some basic changes in audio output, notifications, and update the firmware when available. The Plantronics Hub mobile application supports the Sync 20 only, not the Sync 10. When I connected it with my smartphone, the Plantronics Hub application shows the previously synced Sync 20, but all the actions [such as volume up/down, etc] was reflecting. This device was not there in the list too.

Again, this will not be an issue as it will not impact on the performance of the Sync 10 at all.

If you can stretch your budget then obviously can go with the Sync 20. In case INR 10,000 is the max budget for you, will not regrate with the Sync 10 at all. It is still capable and powerful enough to fulfil most of your needs in the hybrid work environment.

Apple Pay vs Google Pay: Which is Better? A detailed comparison