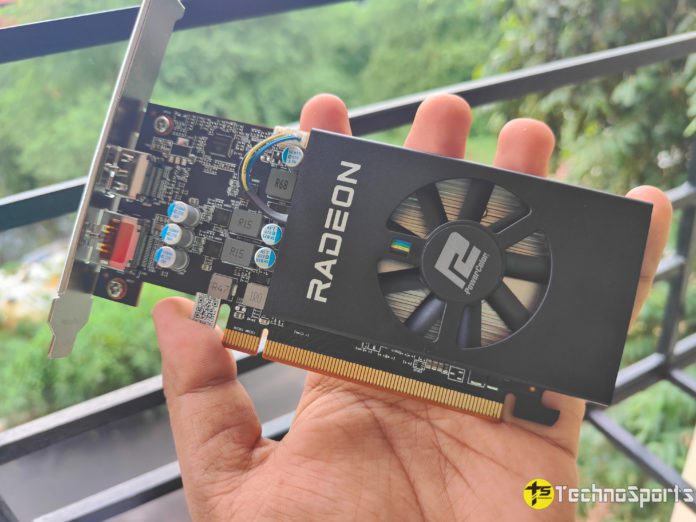 Entry-level gamers have not been blessed with a lot of options in recent years as AMD and NVIDIA have fully focussed on the mid-range to high-end gaming categories with multiple options. However, as their RX 6000 series and RTX 30-series GPU lifespan is ending pretty soon with new launches nearby they have already introduced the entry-level options.

While NVIDIA launched the GTX 1630 and RTX 3050 for entry-level gamers, AMD launched the RX 6400 GPU and RX 6500 XT options, while we already did the review of the latter, the RX 6400 is here for testing. Obviously, it’s a very budget-friendly card which could get even more discounts on the upcoming festive sales, so, should you buy it?

Let’s find out in our compact yet effective review:

As you can see this is a very simple GPU which doesn’t even need a PSU output and can run from PCI Gen slot only and it supports Gen 4 fortunately. So, essentially it looks more like a low-end display card but can be used for gaming as well, however, the cooling of the GPU isn’t a strong point because of its single-fan design.

This is why this card could be treated for only entry-level gamers who just need a GPU for low to medium-end 1080p gaming, however, you can go for the same RX 6400 GPU by ASUS that comes at almost the same price but with dual fans for better performance and cooling. Obviously, this is not a card which you can flaunt on your PC but acts as a tool for the display and casual gaming.

No one will actually buy this RX 6400 GPU for productivity purposes unless they are very tight on a budget because 4GB VRAM is not actually recommended for professional work. However, very light-end work like Photoshop or Filmora works somehow if paired with a 16GB RAM system.

However, with the outdated video engine and with one single fan, we won’t actually run any heavy benchmarks here because the scores could actually make you ashamed though. Though we would strongly recommend going for the RX 6500 XT which costs some bucks more and is a better value, see its productivity benchmarks in its dedicated review.

Coming to gaming, which will be the main reason why anyone should even go for this Radeon RX 6400, it performs decently at 1080p low to medium gaming but when already told the RX 6500 XT could barely give good results at high settings you know how this can perform in real testing.

The reason why these two cards are still there in the market is primarily that they were originally made for laptops, entry-level gaming ones. However, somehow AMD thought of utilizing the GPU shortage and making these desktop cards in abundance, so, getting one of these GPUs isn’t a hard task at all.

However, we will recommend skipping this Powercolor model with a single-fan because it could crash if used during prolonged gaming sessions, this RX 6400 GPU by ASUS is strongly recommended. Here is a short gaming benchmark test on some of the modern games and how this RX 6400 performs:

At 1080p medium settings, all of these games were played and as you see it just performs how an entry-level GPU should actually perform. With FSR 2.0 though, with supported games you can achieve 60+ FPS easily, we would say and anyone who wants to play Battle Royale games at 1080p only could also consider this easily.

Now, should you buy this PowerColor AMD Radeon RX 6400 variant? Absolutely not unless you need this single-fan low-profile GPU, we will recommend going for the ASUS variant with dual-fans any day. Considering a lot of sales are coming in India if one can get at Rs.13-14k, it makes sense to go for it as it is a modern GPU at the end of the day.

However, do note you cannot run heavy games at high settings and you are limited to FHD and that 4GB GDDR6 VRAM means both productivity & long-term usage is hindered. Now, obviously, you can go for the bit pricier RX 6500 XT GPU which could be a good FHD gaming option to use for a few years now.

These RX 6400 and RX 6500 XT options remain to be entry-level gaming GPUs from AMD with modern chips that enable some new AMD exclusive features like FSR, AMD Smart Access Memory, AMD FreeSync Technology, AMD Radeon Anti-Lag and more. As long as these GPUs are available for cheap and solve your gaming purpose they are good, however, for a reliable future, we will recommend RX 6600 and beyond.

Or stretch your budget more to get this ASUS Dual Radeon™ RX 6500 XT OC Edition: https://amzn.to/3DyWxCZ

PowerColor AMD Radeon RX 6400 review: Budget-friendly for entry-level gamers Entry-level gamers have not been blessed with a lot of options in recent years as AMD and NVIDIA have fully focussed on the mid-range to high-end gaming categories with multiple options. However, as their RX 6000 series and RTX 30-series GPU lifespan is ending...