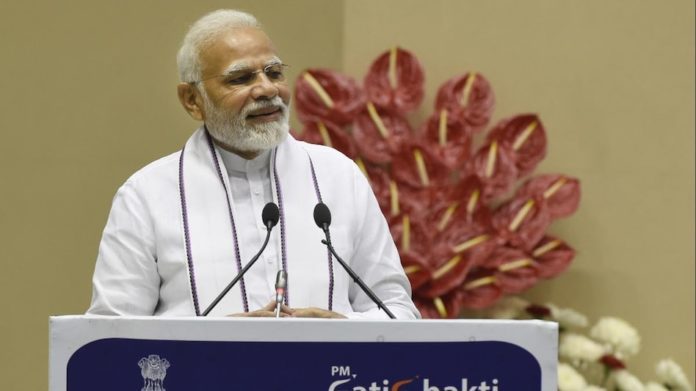 Prime Minister Narendra Modi unveiled the National Logistics Policy in New Delhi on Saturday. While announcing the new policy, Modi stated that it is an important step toward “making of a developed India,” and that it comes with “new energy for every sector.”

This new policy aims to improve last-mile delivery and address transportation challenges. Modi also stated that the new policy, along with the ‘PM GatiShakti’ infrastructure augmentation plan, will address gaps. He described the policy as a solution to many problems and stated that it would improve “all of our systems.”

Vinod Aggarwal, President, SIAM and MD & CEO, VE Commercial Vehicles, on the launch of National Logistics Policy, expressed his views and said: “Automobile industry welcomes the launch of the National Logistics Policy by the Hon’ble Prime Minister Shri. Narendra Modi. It is an extremely vital step taken by the Government that will boost the growth of the Automobile sector as the policy focuses on building superior infrastructure like 35 Multi-Modal Logistics Hubs, which will promote seamless transportation of goods. It is expected that this policy will reduce the Transit Time and Logistics Cost for manufacturers and improve competitiveness of Indian goods in international markets, thereby helping our exports.”

Modi also claims that this policy will reduce business logistics costs from 13-14% to a single digit, putting India on par with countries like Germany and Japan, which are known for their developed logistics infrastructure and spend around 8% to 9% of GDP on logistics.

Dhruv Agrawal, COO & Co-Founder, Shipsy, said: “The National Logistics Policy is an extensive initiative to improve the effectiveness of India’s logistics ecosystem. This will be an unspoken act of support for the logistics sector. NLP aims to encourage the smooth circulation of goods and increase the industry’s competitiveness. The policy is favorable to put a strong emphasis on things like multi-modal transportation, digitization, and process re-engineering. The decision becomes significant because excessive transport costs reduce domestic goods’ ability to compete in the global market.”

“With a motto of Policy + Performance = Progress, the new phase is only getting started. The government’s aim to speed up exports is a welcome move as they build 40 air cargo terminals and have also announced the formation of over 35 multi-modal logistics hubs in India,” added Agrawal.

PM Modi, in his address, said: “In the Amrit Kaal, the country has taken an important step towards the making of a developed India. The echo of Make in India and India becoming self-reliant is everywhere. India is setting big export targets and is also fulfilling them. India is emerging as a manufacturing hub. In such a situation, the National Logistics Policy has brought new energy for all sectors.”

PM Modi also stated that India is now the world’s fifth largest economy and is establishing itself as a manufacturing powerhouse. He went on to say that the world has accepted the government’s production-linked incentive (PLI) scheme for boosting domestic manufacturing.

For the past three years, the centre has been working on the National Logistics Policy. The Ministry of Commerce delayed the release of a draught logistics policy for consultation in 2019 due to the COVID-19 pandemic.

Previous articleFashion ideas and best outfits for men to look trendy in 2022
Next articleI Wanna Dance With Somebody: The New Trailer unveils the Musical Journey of Whitney Houston