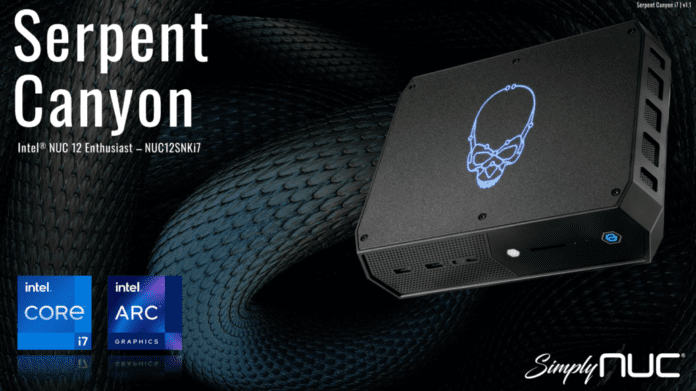 You receive an Intel Core i7-12700H processor with 14 cores, 20 threads, and a choice of the A770 dGPU or integrated Iris Xe graphics (45W TDP). Up to five 4K resolution streams can be produced by the Intel NUC 12 Enthusiast Serpent Canyon SFF Mini PC. The system provides USB 3.2 Gen2, Thunderbolt 4, DisplayPort 2.0, and HDMI 2.1 for connectivity.

The Core i5-12500H processor with 4 P-Cores and 8 E-Cores will power the entry-level design. The CPU has a maximum clock speed of 4.5 GHz, 18 MB of cache, and a base TDP of 45W that can be increased to 95W at MTP (Maximum Turbo Power). Both CPUs are intended for laptops and are suitable for smaller-sized NUC PCs.

The flagship ACM-G10 GPU will be used in the Intel Arc 7 family, and we already know about the mobility models, the Arc A770M and the Arc A730M.

The Arc A770M 16 GB, which uses 32 Xe-Cores for 4096 ALUs and 32 ray tracing units, is one of the top models for mobile PCs that are outfitted with the full ACM-G10 configuration. The TDP of this GPU ranges from 120 to 150W, and its graphics clock is 1650 MHz. Since it will replace the NVIDIA GeForce RTX 2060 that was a component of earlier SFF NUC designs, its performance will fall between between that of the mainstream desktop lineup and the upper end of it.

Additionally, distinct 12 GB and 8 GB models are referenced, indicating the Arc A730M and the Arc A550M. The NUC 12 Extreme and NUC 12 Enthusiast differ significantly in that the former features full-length discrete graphics cards and the latter will have discrete GPUs for the mobile market.

This system qualifies for Intel’s $370 “Arc 7 System Bundle,” according to the company. The system’s 8GB DDR4 memory and 256GB storage are the only known details. The system will set you back $1,699. It is possible to upgrade to 16GB RAM and 1TB storage for an additional $1,944.