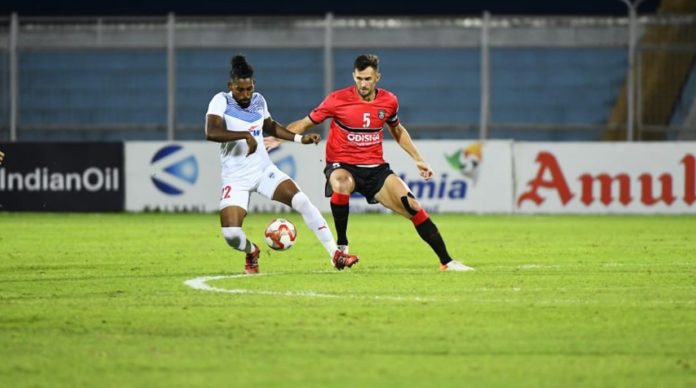 A goal with the last touch of the game by Roy Krishna and a strike from N. Siva Sakthi- his fourth of the tournament, saw Bengaluru FC pull off a 2-1 victory over a 10-man Odisha FC in the second quarter-final at the Kishore Bharati Krirangan on Saturday evening.

With the scores locked at one all, picking up the ball with seconds left to play, Bengaluru’s Krishna unleashed a strike from over 25 yards that flew into the top corner. Krishna says he is grateful for the team for fighting till the end.

Frayed tempers marked play during the regulation time that witnessed as many as eight yellow cards and Odisha’s Shubham Sarangi getting the marching orders. Despite the numerical disadvantage, Odisha FC fought hard but only to concede in the 98th minute with Siva Sakthi scoring his fourth goal of the tournament.

Earlier, both teams struggled to create clear-cut opportunities in regulation time. The most notable event of the period saw Shubham Sarangi sent off for a second bookable offense in the 85th minute as the teams entered an additional 30 minutes.

With a man advantage, Bengaluru took the game to Odisha and eventually scored in the 97th minute. Leon Augustine forced a good save from Lalthuammawia Ralte but Sivasakthi Narayanan was on cue to volley home the rebound.

Just as the Blues looked to take the sting out of the match, the Juggernauts hit back. Diego Mauricio scored with a 115th-minute header from Sahil Panwar’s free-kick to put his side within touching distance of taking the game to penalties.

Just as it looked like the game was headed towards penalties, Ralte made the blunder of putting the ball out of touch with seconds to go for the final whistle. The quickly taken throw-in reached an unmarked Krishna about 25-yards out and the Fijian unleashed a powerful right-footed curler to beat Ralte all ends up.

The Blues thus become the second team after local giants Mohammedan SC to make it to the semi-finals and have now made it to the last four stages in all their four appearances in Asia’s oldest football tournament.