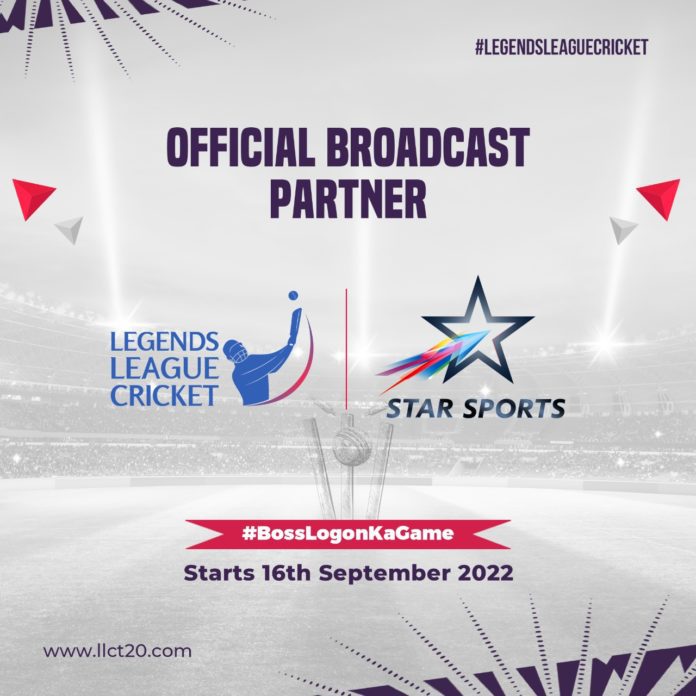 Finally, fans have been waiting to know about the broadcaster of the upcoming Legends League Cricket Season 2 and it’s been declared that the Disney Star network will be hosting this exciting cricket league via both its OTT Disney+ Hotstar and Star Sports network channels.

Cricket fans in the country are in for a real blast from the past as fabled legends of the game from across the globe descend on the field once again in Season 2 of the Legends League Cricket that will get underway from September 16-October 5th, 2022. The organisers have announced Disney Star as the official broadcasters of the tournament that will witness all the 16 matches being aired LIVE & Exclusive on the Star Sports Network and Disney+ Hotstar.

The Legends of Cricket representing ten cricketing nations will regale fans with not only competitive and exciting cricket but also revive the nostalgia and timeless rivalries that these players shared between them.

“The way we had envisioned the League and all the partners that have. We have India’s best Sports broadcaster showcasing the Legends League and the finest Sports Commentators and Analysts will be bringing forth the matches to innumerable cricket fans across the country. Am really happy that the best and finest in the business of Cricket are stakeholders in our journey,” said Raman Raheja, CEO and Co-Founder of Legends League Cricket.

Speaking about acquiring the Legends League Cricket Rights, a Disney Star Spokesperson said, “We are delighted to associate with the Legends League Cricket for Season 2. Disney Star is home to the best of cricket properties, providing fans with memorable moments to cherish. We look forward to elevate the experience of Legends Cricket League through our unique brand of story-telling, and programming.”

With top Indian business houses, Adani Sportsline, GMR Sports, Manipal Group and the LNJ Bhilwara Groups owning the four franchise teams Gujarat Giants, India Capitals, Manipal Tigers and Bhilwara Kings respectively, the biggest names from the cricketing world will be seen taking the field and challenging each other in this exciting tournament.

Catch all the action from Season 2 of the Legends League Cricket, LIVE & Exclusive on the Star Sports Network and Disney+ Hotstar, 7.30 PM onwards, from September 16-October 5th, 2022

Deal: This is your last chance to get the Galaxy Watch4 for only ₹9999