AYANEO Geek 2 revealed: The Handheld device will be powered by Ryzen 7 6800U APU 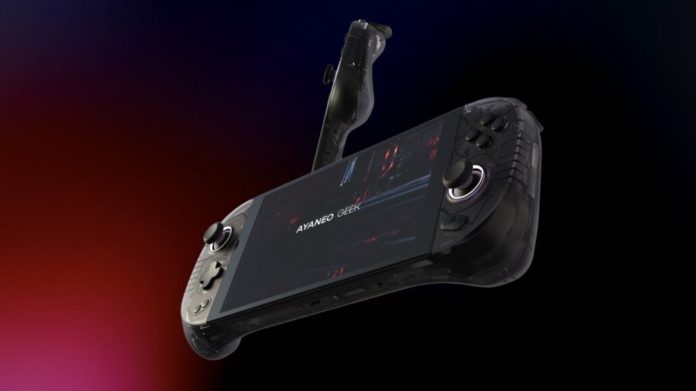 The handheld gaming lines from AYANEO, which compete with the Nintendo Switch and Valve’s Steam Deck, gained notoriety last year. A new version of AYANEO’s renowned Geek series is now being developed, reverting to a traditional form factor and powered by AMD’s Ryzen 7 6800U APU. The business has created a number of systems to locate a place in a variety of price ranges, from $299 to just over $1000.

The black and transparent violet colour scheme of the new AYANEO Geek 2 Handheld Gaming Console is reminiscent to that of the Nintendo 64 and Gameboy Color consoles. This design’s form factor differs from the AYANEO and AYANEO NEXT (both ordinary and PRO variants) that are currently offered on the company website. The system will have 512GB of memory and an AMD Ryzen 7 6800U APU.

Outside of price and style, little else is known about the new AYANEO Geek line.

The closest to the processing power are the AYANEO Next and Next Pro, which are available for purchase on their website and have an AMD Ryzen 7 5825U CPU with eight cores and sixteen threads.

Released in April 2022, the AMD Ryzen 7 6800U APU features the same eight cores spread across sixteen threads, a base speed of 2.7 GHz, and a peak rate that can reach 4.7 GHz. The CPU was designed to support PCIe 4.0 certification and comes pre-equipped with DDR5 support. The AMD Radeon 680M integrated GPU, which has 12 cores and operates at a frequency of 2200 MHz, serves as the APU’s graphics processor.

No current release date for the new system has been announced by the firm, and no details regarding a preorder line have been made public. That would be the tactically optimal moment for the firm to introduce the new system if it plans to do so close to the holiday season in order to compete with Valve and Nintendo. Pricing is set at about 635 US dollars, or 4399 RMB, and the launch should occur soon.

Previous articleKickstarter deals launched ahead of Amazon Great Indian Festival 2022
Next articleNeenu Meeku Baaga Kavalsinvaadini: Everything We know about the new film

AYANEO Air Plus to be launched with AMD’s Mendocino APU