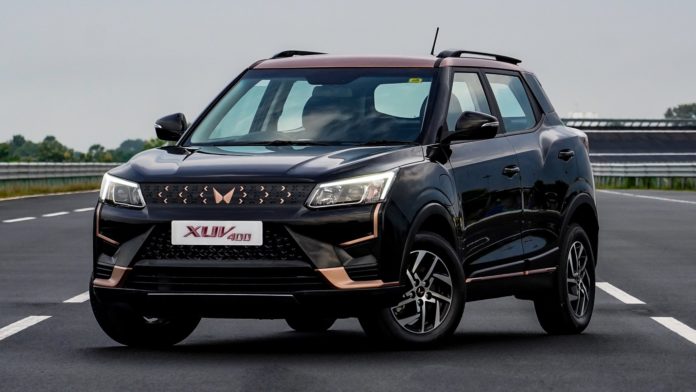 Recently, the rumors spread about Mahindra XUV400 electric SUV mostly following Mahindra XUV300, the leaked footage has suggested that the latest EV will be 4200 meters long, 1634m in height, the overall width is 1821m, and the wheelbase is 2600, and the car will be based on eXUV300 concept that was previously released at Auto Expo 2021.

Mahindra XUV400 has been completely redesigned front fascia with some new headlights that have been integrated DRLs along with a closed-off front grille with bronze colored twin peaks Mahindra logo. The XUv400 has featured LED headlamps and DRLs. The car will take a ride on top-class diamond-cut alloy wheels.

Mahindra XUV400 set to feature new AdrenoX connected car technology. The car is also told to be featured along with ADAS safety measures like we have seen in the famous Mahindra XUV700. The battery of the SUV takes only 50 minutes to charge 80% along with a DC fast charger.

If the user uses a 7.2kW/32A outlet, will take 6 hours and 30 minutes for 0-100% charge,  for a 3.3 kW/16A domestic socket it will take 13 hours to charge. On getting power there Mahindra’s EV giant featured IP 67 compliant 39.5 kWh battery pack and PSM motor become churning out a peak power of 149.5 PS with maximum torque of 310 Nm. The SUV has 8-inch touchscreen infotainment.

Mahindra’s XUV400 will be charged by a  single front-wheel-drive electric motor that can generate 150hp. The car has set to arrive with two battery pack options to provide support to the car to achieve the range of 456kms just on a single charge.

While talking about the price, Mahindra XUV400 is expected to cost Rs. 15 lakh to Rs. 20 lakh (ex-showroom).

The company confirmed that the car will launch the C-segment e-SUV in January 2023, and the customers able to book their new SUV from January 2023. Primarily, the car will be hit in 16 cities. The test drives will start in December 2022.

Read More: Mahindra XUV400: Everything We Need to Know about the Blue Electric SUV