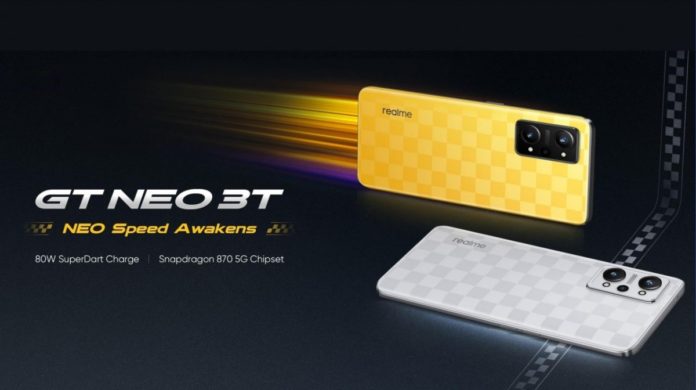 Realme GT Neo 3T was expected to launch in India back in June or July but for some reason that hasn’t happened. Although Realme took to Flipkart to announce the exact launch date of the smartphone in India. As of now, Realme GT Neo 3T has been spotted on Flipkart Big Billion Days’ official smartphone offer page, where the launch date is mentioned as 16th September.

On that page, we can also see the official first look of the Indian variant of the Realme GT Neo 3T. The design of this smartphone looks very similar to its predecessor Realme GT Neo 2T.

The GT Neo 3T powered by Qualcomm Snapdragon 870 SoC was launched in western markets in June this year. It will be paired with up to 12GB RAM and 256GB storage. It is backed by a 5,000mAh battery with support for 80W charging.

As for the cameras, the GT Neo 3T has triple cameras on the back, with a 64MP primary camera, an 8MP ultra-wide lens, and a 2MP shooter. There is a 16MP selfie snapper on the front for selfies and video chats. It runs on Android 12-based Realme UI 3.0 custom skin out of the box.

As per past reports, the Realme GT Neo 3T is tipped to be available in 6GB + 128GB, 8GB + 128GB, and 8GB + 256GB RAM and storage configurations. Realme GT Neo 3T is equipped with Dolby Atmos, Hi-Res audio, VC cooling, and an in-display fingerprint sensor for security.  Connectivity options include 5G, Wi-Fi 6, Bluetooth 5.2, GPS, NFC, and a USB Type-C port. The phone packs a 5000mAh battery with 80W fast charging support.

It is said to be available in Dash Yellow, Drifting White, and Shade Black colours and carry a sub-Rs 30,000 price tag. The Realme GT Neo 4 will be launched in India on December 31, 2022 (Expected). The mobile will be equipped with striking features and specifications. You will be able to buy this mobile from RealMe at a starting price of Rs 29,192.