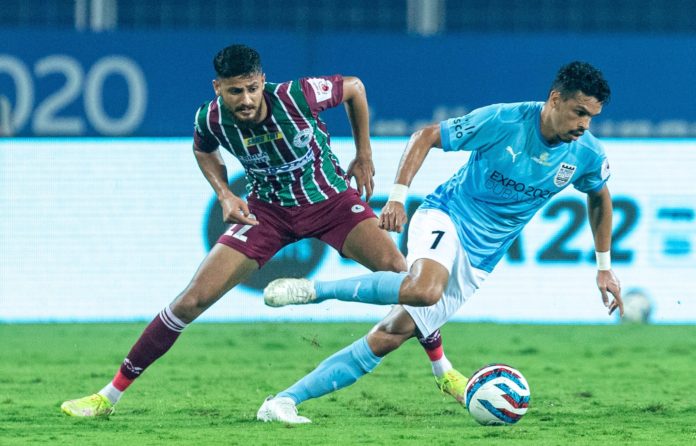 ATK Mohun Bagan is yet to register a victory at Durand Cup 2022 as they drew 1-1 against Mumbai City FC today, at Salt Lake Stadium. ATK Mohun Bagan kept their hopes alive for a place in the knockout. Liston Colaco put the hosts ahead in the 40th minute. But Pereyra scored the equaliser for Mumbai in the second half to hand ATK their second draw in the tournament.

Liston Colaco hit the up-right after combining well with Hugo Boumous and Ashish Rai on the right flank. Greg Stewart did try to get the better of Floretin Pogba but the ATKMB defenders converged to thwart the dangers. The referee waved away calls for a penalty from the MCFC players.

There were shouts of penalty at the other end as well. when Liston was brought down inside the six-yard area after a blistering run down the spine but the referee deemed Vignesh’s challenge as legal. In the 16th minute, Rahul Bheke came close with his headed effort from a corner after Deepak Tangri lost the ball in midfield.

In the 35th minute, Greg Stuart and then Alberto Noguera had back-to-back chances due to mistakes in the ATKMB defence but could not capitalise. Liston scored in the 39th minute with a poacher’s goal after Mumbai City’s Phurba Lechenpa parried Ashish’s shot after being released down the right by a well-waited pass from Hugo.

At the 76th minute mark, Sanjeev Stalin sent in a delicious ball from the right with his weaker foot as another substitute, Jorge Pereyra Diaz climbed high unmarked to thump in at the back post and bring parity to the scoreline. Even though both teams managed attacks in the final few minutes, neither could change the outcome.

There is the prospect of a boisterous home crowd already smarting from a first-game defeat in the tournament. If ATKMB loses, which it has, four times in their five previous meetings, with their Wednesday opponents having drawn the fifth one, even a win over its arch-rival, Emami East Bengal (EEB), in its next outing, might not help it cross the line. With the draw, ATKMB have just one point from two matches, while Mumbai have four points from two games it played so far.