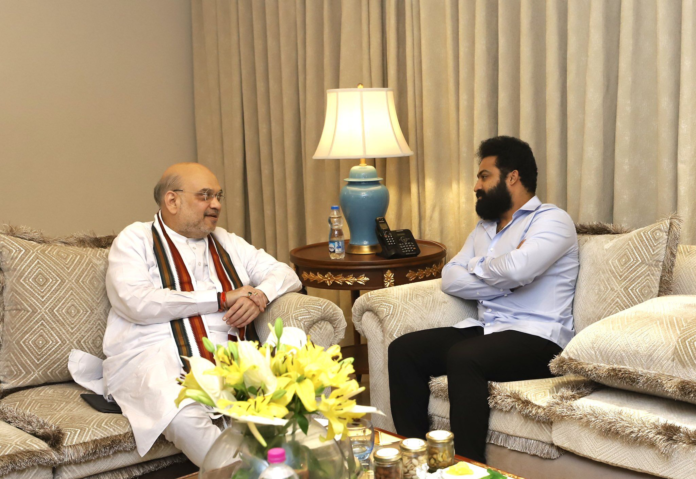 India’s respected Home Minister Amit Shah recently met with RRR’s popular actor Jr. NTR on 21st August in Hyderabad. After the meeting, he shared some candid images of the two with the superstar on the official Twitter account. In addition, he unveils his feeling that delight in meeting the Telugu actor, and has praised him. The home minister also called him the ‘Gem of Telugu Film Industry. The images of their meeting are spreading rapidly on social media.

On sharing the images on Twitter, Amit Shah also wrote, “Had  a good interaction with a very talented actor and the gem of our Telugu cinema, Jr. NTR in Hyderabad (sic).”

Shah and Jr. NTR also has seen shaking their hands in some images. One of the images also reveals them to be busy in a more insightful conversation with each other.

RRR is definitely one of the blockbuster works of SS Rajamouli who is already known as a huge commercial triumph in the film industry entirely.  Now, it seems to be quite impossible to intend  Jr.NTR and ram Charan’s sky-high success on the big screen like their huge national fame.  It has been reported that in the box office run of this epic action-drama that has earned Rs. 902 Crores in India, across the world the show h Made Rs 11 crores collection.

In the coming days, Jr. NTR has signed for many projects under development. He has set to collaborate with Koratala  Siva on the untitled revenge thriller. He also exposed him and Prashanth Neel. The KGF director might be collaborating on the new project.

Previous article
Cody Gakpo emerges as Antony alternative for Manchester United
Next article
Activate Your Parimatch Bonus Code and Get a Great Bonus on Your First Deposit!

RRR OTT platform release date: All details and updates about the time of release