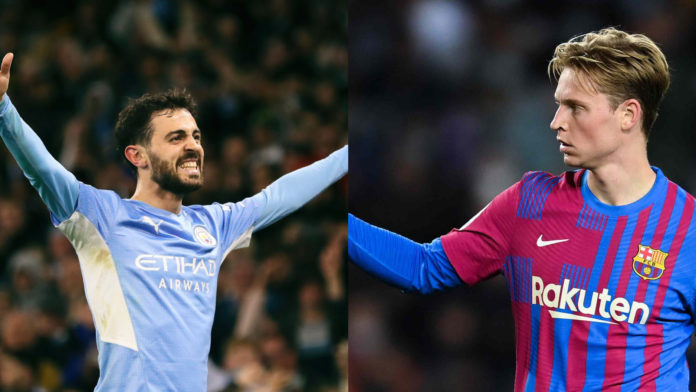 The 2022 summer transfer saga is just not ending yet as we enter into the final two weeks before the transfer deadline approaches at the end of August. So, the Blaugranas want to further strengthen their team and Joan Laporta’s obsession with Bernardo Silva doesn’t end here.

Could Bernardo Silva and Frenkie De Jong play together at FC Barcelona?

As we move closer to the deadline day, it seems almost likely that the Portuguese midfielder will play at the Camp Nou, which by the way has been a dream of the player. However, Manchester City won’t sell him for cheap as they have lost many important players this season and giving way a versatile player like Bernardo for cheap isn’t a good way.

The benefit it has, being a state-owned club is the immense wealth it owns, as we know FC Barcelona doesn’t have the best financial records to match the 80 million euros price tag but they can offer Barcelona the option to repay in instalments, the same kind of deal that occurred with Ferran Torres.

Now, suppose Barça get the Portuguese midfielder by paying the transfer fee to Manchester City, the problem they now will face to manage the books for all players and get them registered into LaLiga’s strict salary cap. So, CatalunyaRadio who are quite reliable often have stated that FC Barcelona will have can keep both Frenkie De Jong and Bernardo Silva only if important players like Dest, Memphis & Aubameyang leaved the club.

It completely depends on the club how they will be going ahead in the final days of the very long summer transfer windows and how Laporta along with Xavi finalizes the team for the 2022/23 season. Also if Barça can achieve its ambitious dream to keep both the best midfielders in the world together.