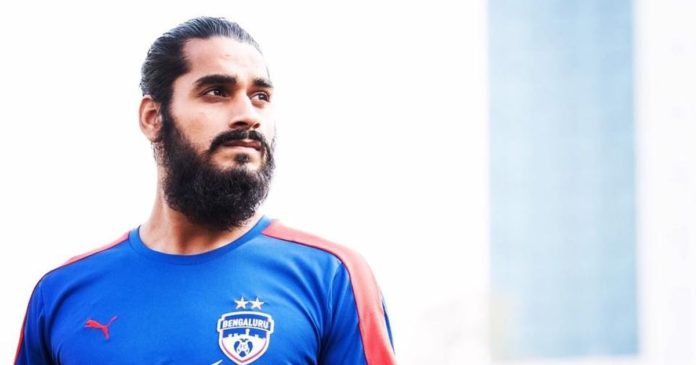 Defender Sandesh Jinkan, who left ATK Mohun Bagan in the ISL, joined Bengaluru FC. This was announced on the team’s Twitter account with a Super Sunday Surprise note. Bengaluru’s official Twitter account wrote that Sandesh Jhingan was introduced to the team’s fan base, West Block Blues, during a training session and he will be ours.

Sandesh Jhingan’s announcement came as a surprise to many as the defender was reportedly looking at multiple offers, which included clubs outside India. However, the early Sunday morning announcement sent the Blues’ fans into a state of frenzy. The Indian national team defender is now back with the club after five years. He was on loan from Kerala Blasters FC during his first stint with the Blues. Jhingan featured in 18 matches, scoring one goal during his tenure with the club.

Sandesh Jhingan, whose most recent stint was with fellow ISL side ATK Mohun Bagan, has had a decent time with the club. He joined the side ahead of the 2020-21 campaign and was an important figure in the back-three employed by former head coach Antonio Lopez Habas.The team finished second in the table behind eventual League Shield winners Mumbai City FC and lost to the Islanders in the fight for the ISL trophy. The 29-year old centre-back moved to Croatia ahead of the 2021-22 campaign and joined HNK Sibenik. Plagued by injuries, Jhingan failed to make an appearance for the club.

“In Jhingan, we have signed a player who can turn out as a central defender and provide cover in full-back positions,” said BFC head coach Albert Roca. “He is coming off the back of a very good ISL campaign and his introduction adds to a squad that will need his presence as we look to compete in both the I-League and the AFC competitions.”

Jhingan started his career at United Sikkim in 2011 and then moved to Mumbai FC. Last season, he turned out for DSK Shivajians in the I-League. “It feels great to be here. Bengaluru FC are the champions and one of the best clubs in India right now, so it’s an honour to have been approached by them. I had no doubts in my mind and when the offer came about I just said yes,” he said.

“When things got over between ATK Mohun Bagan and me this season, I took some time off with my family to decide where I will move next. Then I spoke with Sunil paaji. I know the DNA of the club. BFC have been one of the top clubs since inception,” Jhingan added.

Bengaluru FC have been busy revamping their squad after two seasons of disappointment. Under new gaffer Simon Grayson, the Blues are hoping to make a comeback to their old form. They have added Javi Hernandez, Roy Krishna, Prabir Das, Aleksandar Jovanovic, Faisal Ali, Hira Mondal, Felixson Conny Fernandes, Amrit Gope, and Clarence Fernandes to their squad this season. Sandesh Jhingan’s arrival in the dressing room has become a significant move by the club in their bid to regain their old status.