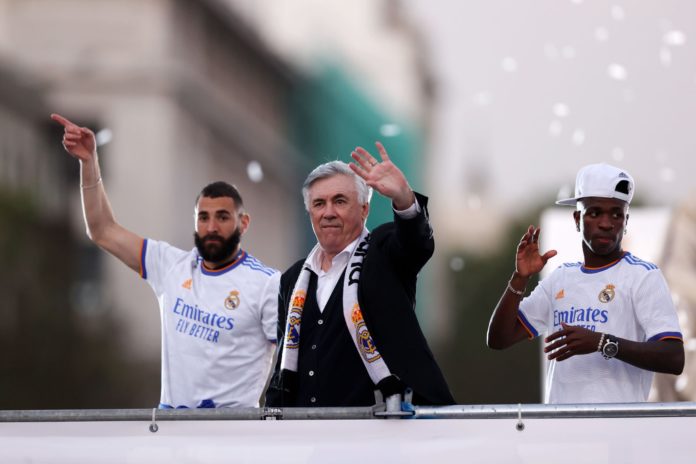 Carlo Ancelotti has confirmed that he will retire from management after his spell with Real Madrid. The Italian returned to the Spanish capital last summer, after Zinedine Zidane left the club.

And following his comeback, he won the La Liga trophy and Champions League in the same season. Madrid were also able to win the 2022 UEFA Super Cup a few days ago, defeating Europa League winners Eintracht Frankfurt 2-0.

Carlo Ancelotti to call it a day after Real Madrid

“Twenty four titles in my career? The truth is that these numbers do not matter to me,” said Carlo Ancelotti, while speaking to Il Messaggero. “I’ll think about that at the end, when taking stock makes more sense. Now I am focused on training; I like the daily work.

“Until a few years ago, my priority was tactics. Now I focus on human relations, getting to know people and new generations.”

He added: “This stage at Madrid will bring an end to my career. After Real Madrid, I will retire.

“Real Madrid is at the very top of football. It makes sense to call it a day after this experience.”

The veteran still has two years left on his contract with Los Blancos, with the option to extend for another year. He is the only manager to win the Champions League four times. And regardless of when the time comes for him to retire, he will go down as one of the greatest to have ever coached in football.

Previous articleBallon d’Or 2022: Why Messi and Neymar were left out; Who wins the award?
Next articleFrenkie De Jong considering move away after tension at Barca