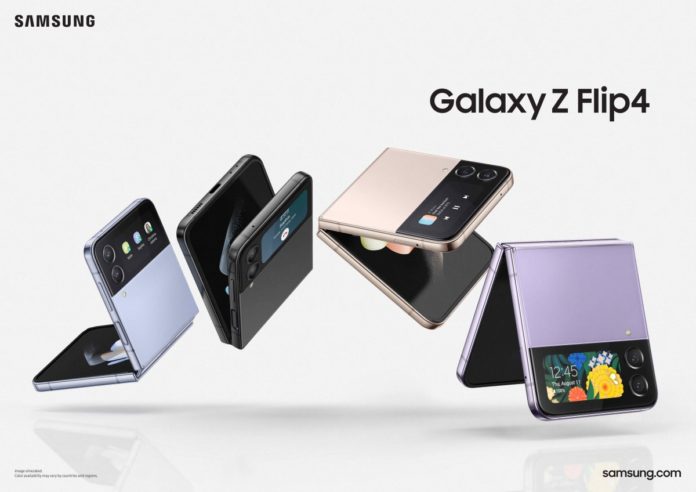 The latest foldable device arrives with a clamshell design and has a slimmer hinge with a narrower gap that makes the device compact and less likely to be damaged. The smartphone measures 84.9 x 71.9 x 17.1mm in its closed state and when unfolded, it measures 165.2 x 71.9 x 6.9mm. The glass panels on the rear now arrive with a layer of Corning Gorilla Glass Victus+ for extreme protection, the frame is made out of Armor grade aluminum.

The bezels on the display have been trimmed while the diagonals screen measures 6.7″, the panel is a Dynamic AMOLED one with an FHD+ resolution and a refresh rate of 120Hz similar to its predecessor. It has an aspect ratio of 22:9 and a punch-hole cut for the 10MP selfie shooter.

The AMOLED display measured 1.9″ and has a resolution of 260 x 512 pixels similar to the Flip3 but Samsung has added to its functionality this time by offering an array of custom options such as panels and themes that sync with the UI of the phone. You can now respond to messages with speech-to-tet and emojis directly from the cover screen.

In the widgets category, there are multiple options and quick settings controls that allow users to dial up to three contracts without having to manually open the phone and now you can control SmartThings home devices. Samsung Pay cards will now be visible directly on the small screen as well.

The phone is powered by the Snapdragon 8 Plus Gen1 chip and has been paired with 8GB RAM and 128GB/256GB/512GB internal storage options. In the optics department, we see a pair of 12MP sensors and an optically stabilized 12MP f/1.8 primary shooter with 1.8µm pixels. The ultrawide shooter is the same 12MP module with an f/2.4 aperture.

On the software aspect, it runs on OneUI 4.1 with Android 12 OS, and Samsung has also introduced a new FlexMode option with optimized UX for video calling via apps such as Google Meet, Zoom, and Facebook Messenger. The Flex Mode touchpad with precise controls will be supported on multiple apps while multi-windows allow users to launch a constantly growing list of apps on both halves of the screen.

In terms of battery life, we see a 3,700mAh battery with support for 25W charging which is much better in comparison to the 15W charging support we saw on the Z Flip3.

Samsung has introduced the smartphone in Graphite, Pink Gold, Bora Purple, and Blie shades. There is also a Bespoke Edition model that one can configure to their liking via Samsung’s official site. You have an option to match up to 75 different color combinations.

In terms of pricing, the Galaxy Z Flip4 retails for $999 or Rs.78,997 for the base variant. Pre-orders for the smartphone have already begun and the first sale will happen on the 26th of August via Samsung’s official site.