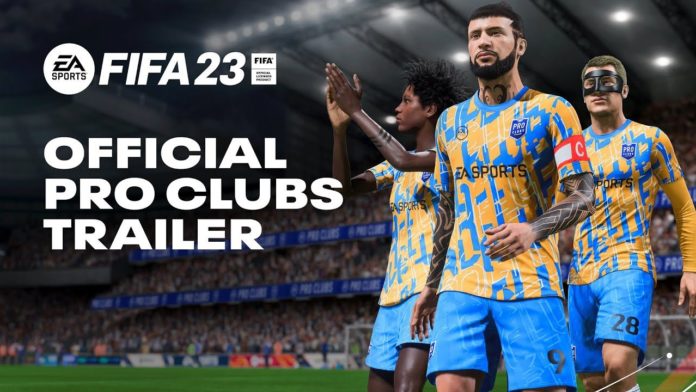 EA Sports’ football-based video game FIFA has been a huge hit with the players over the years. They release a new version of the game around September each year. They have already started planning the release of the next FIFA game, FIFA 23.

However, many things are going to change in the upcoming edition, which is expected to be the last game of this franchise. The current partnership between EA Sports and FIFA has been extended to cover World Cup but this year’s FIFA 23 could be the last game of the franchise to be released. Starting from July 2023, EA Sports will be launching EA Sports FC which will take the place of the football-based video game.

EA Sports have now released their Official Pro Clubs Deep Dive Trailer for FIFA 23. One of the main highlights is the introduction of Shared Progression between Pro Clubs and Volta Football.

Some of the main features which have been added to the game are:

“I share your desire to see cross-play in Pro Clubs, and understand the frustrations for not seeing it included in the launch of FIFA 23. While we’re excited with the first steps to bring new cross-play features to FIFA 23, we also recognize what cross-play functionality could mean to the Pro Clubs mode with the potential for improving matchmaking and allowing friends from different platforms of the same generation to play together.”

“With the scale of such an important feature, our goal is to bring you the best possible experiences.  As we look at our cross-play future, we’re focused on matchmaking in Pro Clubs, VOLTA, and FUT Co-op, as well as cross-platform lobby invites and ultimately cross-platform Pro Clubs.”

“We’re eager to provide updates in the future as the team continues to execute the plan for the future of cross-play. We love the passion of our community, and you help strengthen our resolve to push the mode forward and to bring quality changes for you to enjoy as players.”

Previous articleMalayankunju: Fahad Faasil’s new movie is all set to release on the OTT platform on 11th August
Next articlePlayerzPot Teams Up With Indian Superstar Rashmika Mandanna As Brand Ambassador