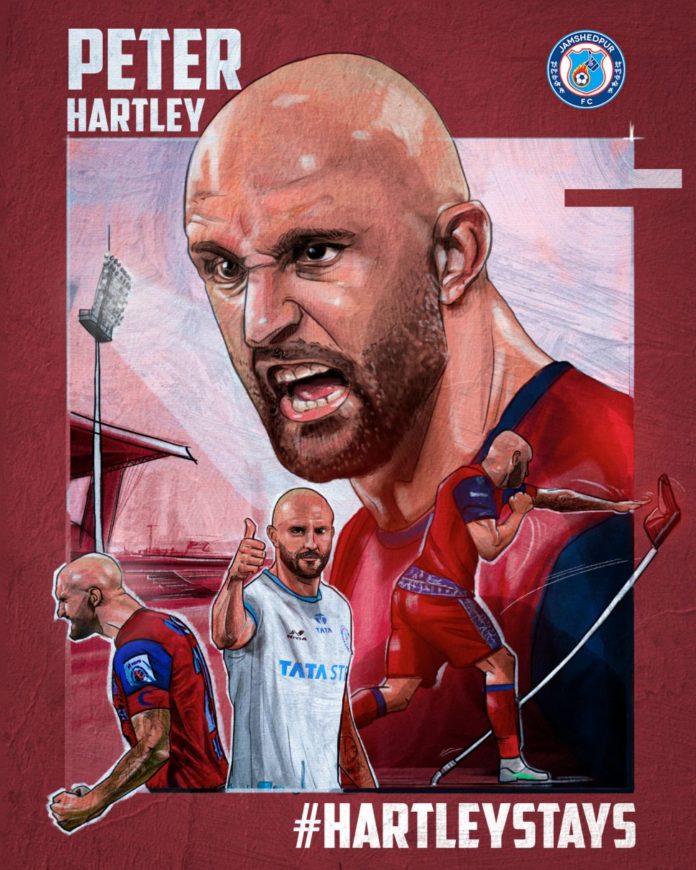 Jamshedpur FC signed a one-year extension contract with the center-back and club captain Peter Hartley. The Englishman played a massive role in securing the league’s trophy.

With his rock-solid defensive performances, Peter Hartley quickly became a fan favourite. He has been an influential leader for the squad and scored three goals during the campaign.

On signing the dotted line, Peter exclaimed his joy at continuing his ISL journey in red. He said,” This season with Jamshedpur was very special to me; not only did we win the League Shield but also scored the highest point by any club in ISL history. The aim for this season will be to retain the CHAMPIONS OF INDIA title. Jamshedpur is a very special club with amazing people both on & off the field. I am delighted to call it my home for the future. “

Hartley started his journey at Sunderland AFC Academy. The left-footed centre-back was scouted into the youth system as a 12-year-old and rose to the ranks with his impressive performances. Later, the Englishman had stints with Stevenage, Plymouth Argyle, Bristol Rovers, and Blackpool before joining Motherwell FC.

The defender has played in prestigious tournaments in England like the FA Cup and the League Cup, where he represented his clubs against Chelsea, Everton, Sheffield United, Watford, and Wigan Athletic.

Peter also expressed his joy in joining this year’s squad with the new gaffer Aidy Boothroyd,” I had some fantastic conversations with the gaffer throughout the off-season, and I am very excited to work with Aidy Boothroyd. He is a great coach and has helped several English players to grow and develop their skills. I am excited to work with his guidance and do my best for Jamshedpur and its fantastic supporters.”

Aidy was ecstatic to see Peter continue.” I have seen what a significant role the skipper had played in the earlier seasons. Having the most clean sheets in the past is because of Peter’s defense prowess with the team and had a great partnership with Eli Sabia. He brings forth a sea of experience that helps the team. It’s great to have him again.”

Hartley will be seen in his 29 jersey in the coming season.

Previous articlePKL Auction 2022: Full List of sold players at the auction
Next articleQualcomm is now the official sponsor of Manchester United football club