The South Indian actor Karthi has declared about his new film, ‘ Viruman’ this is an action drama film that’s directed by Muthaiah. The action-packed film got an official trailer, and the actor just shared the poster. Viruman has been marked as the second film of Karthi with Muthaiah. The director is renowned mainly for the rural action er just like Marudhu and Kottapalli.

The trailer has been clocked for more than two minutes. The new action-comedy trailer starts with a rural where a son and his mother sitting on a rock, the son holding an orange stick ice scream, and truly depicts a shadow of poverty, after that, we have seen the entry of Karthi beating in a ring.

South Indian films and actions are two side of the coin without each the film becomes incomplete, Karthi appears beating one by one foe, and in slow motion, the action with brick really give you goosebumps. In this film, we will see Aditi Shankar playing the role of Dhenmozhi this movie is based on a village story.  The heroine’s father becomes the antagonist who never thinks to shoot. The trailer can give you a different idea to propose to a girl, feels very funny.

The power-pack action between father-in-law, and son-in-law. Karthi has defeated the goons like a washer washing the clothes. Karthi will not give up he is ready to beat more. The style of his with a sunglass is really fantastic.

The film features Aditi the daughter of ace director Shankar. Apart from her, there are also Prakash Raj, Rajkiran, and Saranya. The film has been produced by b Karthi’s brother Surita under the banner of 2D Entertainment, and the music of Viruman is helmed by Yuvan Shankar Raja.

Viruman, the action pack film of Karthi will hit on 12th August 2022. 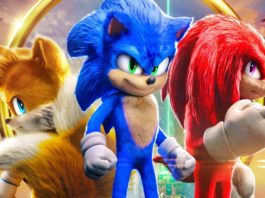 Sonic the Hedgehog 3: SEGA confirms the official Release Date of... Koffee With Karan: In Episode 6 the guests are Sonam Kapoor... The Next 365 Days: The trailer hints about the Love Triangle...