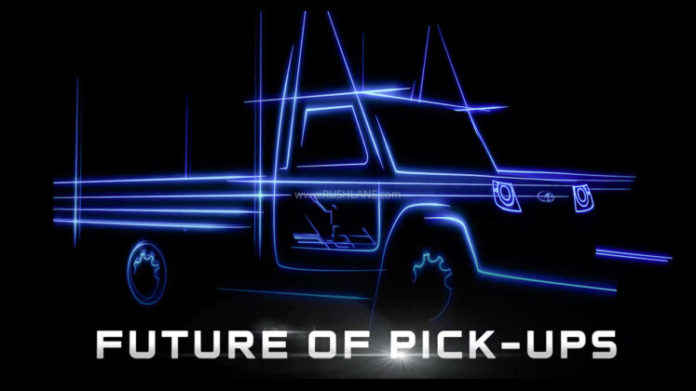 Mahindra will be launching its new electric car range on the 15th of August:

The upcoming teaser features the tagline, ‘the future of pick-ups,’ apart from the minor design highlights, there is no information with respect to the battery capacity or other specifications. This new vehicle will have blue accents on the interiors and exteriors.

The new EV will have two seats, a ladder on the frame chassis, and load-carrying capacity like the existing version. The upcoming Bolero has a range of 140-150 KM on a single charge, the new range will be apt for intra-city logistics, for long-distance transportation runs, and the diesel variant will always be the best.

Mahindra is looking to increase the popularity of electric mobility in the commercial vehicle space which does not have as many options as of now. The pickup truck will create a new segment, one that has immense potential in the future.

The only two other commercial EVs are the Tata Ace Electric, Tata Ultra, and the 7 electric. The carmaker has also announced that it will be launching a total of 5 new electric vehicles on the 75th Independence Day. All of these are electric SUV concepts, four out of them fall under the SUV coupe category. The band will also be launching the XUV400 eclectic SUV which will be the electric version of the XUV300.