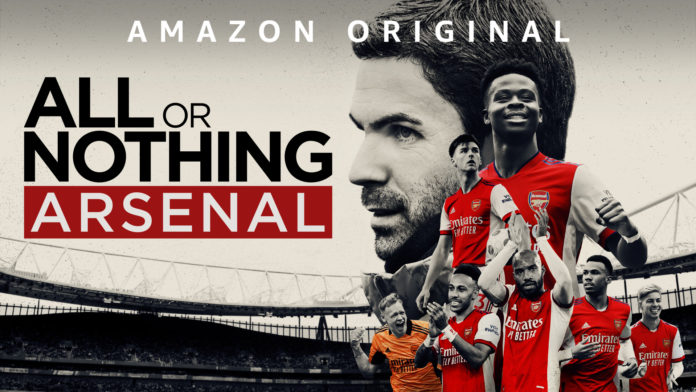 All or Nothing: Arsenal documentary trailer released

All or Nothing is an Arsenal documentary same as the Manchester City and Tottenham Hotspur iterations of the series. This documentary will also give the audiences an inside picture of the north London club as cameras will be allowed inside Emirates Stadium as promises have been made to the fans that it will show how the club operates as they undergo a new season. Along with it, it will also present in front of us the interviews and insight from players and staff.

The series was scheduled to be released in 2022 but it is assumed that it will cover all the happenings of the year 2021-2022 campaign, as these series usually take place over a substantial period of the campaign.

On the website of Arsenal, it is posted along with a caption that reads, “All or Nothing: Arsenal will take our fans behind the curtain during a crucial season as we focus our efforts on challenging for domestic success and returning to elite European competition.”

“As well as capturing the highs and lows of life at the Emirates Stadium and our training center, the All or Nothing cameras will follow our squad away from the pitch to examine the daily challenges faced by elite athletes, the work we do in our local and global communities and what connects the Arsenal family and our special club.”

“All or Nothing will give our fans and sports lovers an opportunity to learn more about what makes Arsenal such a special club, our trophy-laden history, and our ambitions for future success.“

Release date and how to watch it?

All or Nothing Arsenal documentary is all set to be released on 4th August 2022 on Amazon Prime Video. The series contains 8 episodes, the first three episodes are going to be streamed exclusively on Amazon Prime Video in over 240 countries and territories on Thursday i.e., 4th August 2022. Every week three episodes will be released the full release schedule of the series are as follows:-

Read- List of famous celebrities who did nude photoshoots