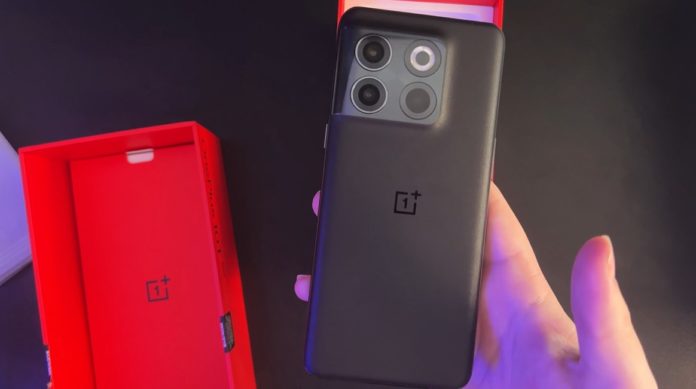 An unboxing video of Oneplus 10T has already landed on YouTube. Now nothing is left about the device knowing, it is yet to be launched. The video featured a reviewer’s equipment having equipment for testing the system whereas the retail bundle is a purple field. The unboxing video reveals a Moonstone Black variant of the smartphone along with a 160W adapter and USB-C cables.

The unboxing video also included a size comparison with the iPhone 13 Pro Max, Samsung Galaxy Note20 Ultra, and the Nothing Phone (1). The video also showed that the 10T will not support wireless charging, unlike the 10 Pro.

The OnePlus 10T shows off the design language of its Pro sibling, but with some subtle touches. At first glance, the OnePlus 10T looks very similar to the 10 Pro. This is because we wanted the 10T and 10 Pro to look like they belong to the same family. The 10T features the iconic camera module of the 10 Pro and features a seamless design.

OnePlus 10T features a 6.7-inch FHD+ Fluid AMOLED display with 2,412 x 1,080 pixels resolution and support for HDR10+. The punch-hole at the front is said to house a 16MP selfie shooter with EIS support. The handset has also been confirmed to be powered by the Qualcomm Snapdragon 8+ Gen 1 SoC.

Previous OnePlus devices, such as the 10 Pro, were equipped with a charging pump. Of course, this means that the 10T doubles the space required for the device’s charging pump. It limits space on the device and includes an alert slider. Without increasing the thickness of the device, the maximum battery capacity that could fit in the OnePlus 10T while retaining the alert slider was 4,500 mAh.

OnePlus has also revealed that 10T features a triple camera system that’s headlined by the flagship 50MP Sony IMX766 sensor with OIS and EIS support. Accompanying the OnePlus 10T’s primary 50 MP shooter is an ultra-wide camera with a 119.9° field of view and a macro camera.

The device will be offered in two colour options – Moonstone Black and Jade Green. The smartphone will be available for pre-order via the e-commerce website starting August 3.