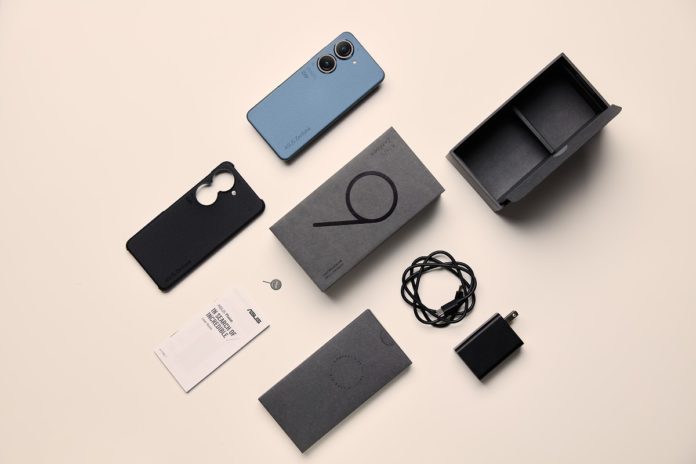 Asus has unveiled its Zenfone 9, the successor to the Zenfone 8. The latest smartphone is much smaller in comparison to its predecessor but that does not mean it is inferior, it has a much bigger camera sensor, a bigger battery, and a larger VC for the chip.

The device weighs just 165g and it is one of the smallest Android flagship devices. Though not a mini version, it features the latest and the best, Snapdragon 8 Plus Gen1 chip and for cooling, the heat pipe of its predecessor has now been replaced with a much bigger vapor chamber to keep the heat in check.

The latest device arrives in three versions namely, an 8GB+128GB version, an 8GB+256GB version, and a 16GB+256GB version. It features the LPDDR5 RAM and UFS 3.1 storage versions. It runs on Android 12 OS and will be eligible to get 2 major OS updates along with 2 years of security patches.

In terms of design, the frame is made out of aluminum, the rear is made out of a polymer material which is much more durable than plastic and is shatter resistant as well. The Zenfone 9 has an IP68 rating for dust and water resistance while the display has a layer of Gorilla Glass Victus.

The modest 5.9″ display is a breath of fresh air in the market as it is unlikely to see any smartphone with a display measuring under 6.3″-6.8″. The display has an HDR10+ OLED panel from Samsung and it has a resolution of 1080 x 2400 pixels. It arrives with a high refresh rate of 120Hz and a touch sampling rate of 240Hz with a peak brightness of 1,100 nits.

Asus has calibrated the display at two different brightness levels in order to ensure a high quality image in any circumstance, it also supports DC dimming at low brightness levels along with an Always-On mode.

The Zenfone 9 has a triple camera setup on the rear with a 50MP Sony IMX766 sensor with a 6-axis hybrid gimbal stabilizer that is much better when compared to OIS and it uses a 12MP secondary sensor and a 16MP sensor. On the front, it has a 12MP selfie shooter that can capture 4K videos at 30fps.

Apart from this, the device offers an amazing audio experience as it has combined Qualcomm’s hardware with Dirac tuning, it has a dual-stereo speak on board, one on the bottom and one on the top. For those who prefer wireless, the smartphone supports aptX HD and Adaptive along with LDAC and AAC. Users will also be able to customize their audio experiences.

In terms of battery life, we get a 4,300mAh battery with support for 30W HyperCharge. Users have the freedom to set the maximum charge limits at 90%, 80%, and so on. This assists in reducing battery degradation by 7% after 500 cycles as opposed to 15% if charged fully. The brand promises up to 2 days of battery life. For biometrics, you get a side-mounted fingerprint scanner. The phone has the Game Genie as well which blocks notifications but allows you to have any app to be open over the game in case you need to check something.

This feature will show you the FPS, estimated battery life, system temperatures, and more. In addition to this, it can also purge background apps from the RAM. It arrives with a built-in screen recorder in case you wish to record the gameplay. Asus has put together a decent retail package that arrives with the 30W HyperCharge adapter and cable along with a bumper case.

In terms of pricing, the device retails for EUR 800 or Rs.64,690 for the 8GB+128GB version and will be available in Europe, Hong Kong, and Taiwan first before being available in North America, Japan, Indonesia, and other parts of South America.

In addition to the smartphone, the brand has also unveiled a series of cases dubbed the Connex accessories set that allows accessories to be attached to them. There is also the Smart Backpack Mount which attaches to the shoulder strap of your backpack and keeps the device stable which allows you to use it as a sort of a go pro as well.