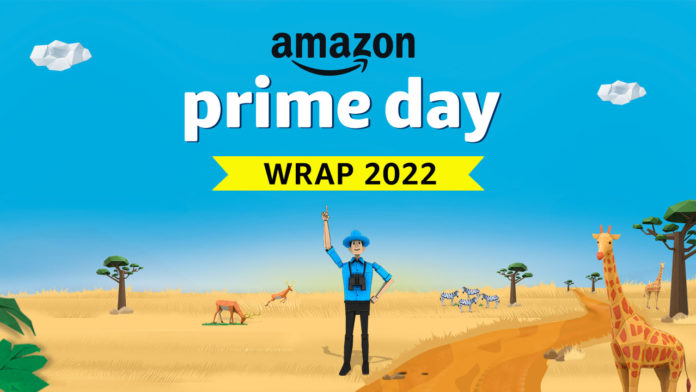 Bengaluru, July 26, 2022 – Prime Day 2022 in India came to a successful close this weekend (July 23 and 24) with members across India discovering joy at the two-day celebration with the best deals, savings, new launches, blockbuster entertainment and more! Prime members from 95% of the pin codes in India purchased during this year’s Prime Day more than 32,000 sellers saw their highest ever sales day.

1.5x more customers signed up for Prime membership compared to last year’s Prime Day, with 2 out of 3 new members joining from outside of the Top 10 towns/cities like Rourkela, Mokokchung, Kullu, Dholpur, Nagapattinam, Tonk, Sehore, Kanchipuram, Raebareli, Ramgarh, Thanjavur, Sawai Madhopur, Yamuna Nagar. India’s Prime Day entertainment line-up on Prime Video was loved by consumers within and outside the country. Prime members from over 3800 Indian cities and towns, and in over 230 countries and territories have watched India’s Prime Day releases on Prime Video.

Commenting on the success of the event, Akshay Sahi, Director, Prime and Delivery Experience, Amazon India said, “Prime Day is a celebration of our Prime members; Small & medium businesses and we are truly humbled by their participation. We had thousands of deals, 500+ new product launches from brand partners and sellers and exciting blockbuster entertainment which our customers loved. The strong growth of new Prime member sign-up especially from smaller towns and cities across India is a strong testament to Amazon Prime’s commitment to provide unmatched value to our members, every day.”

Customers shopped from 50% more sellers vs last Prime Day, from 11,738 pincodes during the lead-up and on Prime Day this year. 70% of the sellers who received an order are from Tier 2-3-4 cities like Kolhapur, Surat, Ghaziabad, Raipur, Coimbatore, Mangalore, Jalandhar and Cuttack. These sellers include artisans, weavers, women entrepreneurs, start-ups and brands, local offline neighbourhood stores. More than 32,000 sellers saw their highest ever sales day. Nearly 18% more sellers’ grossed sales over INR 1 crore and close to 38% more sellers grossed sales of over 1 lakh vs last Prime Day. Local neighbourhood shops that sell on Amazon.in witnessed a sales growth of 4X.  Customers enthusiastically chose to buy genuine Indian handlooms and handicrafts as artisans, weavers and artisanal brands from Amazon Karigar witnessed nearly 4.5X sales uplift. Women Entrepreneurs under the Amazon Saheli doubled their sales.

In 2021, Amazon introduced a new leadership principle – Success and Scale Bring Broad Responsibility. Staying true to this principle, the company has taken several steps to build more sustainable operations across the country. This Prime Day, Amazon deployed a large fleet of electric vehicles (EVs) on Indian roads -up 4.5X from last year to deliver tens of thousands of packages to customers covering more than 160,000 KMs.