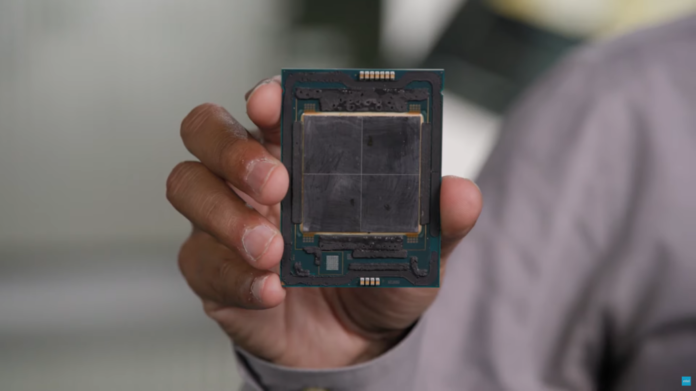 Not only has Intel verified the 14th Gen Meteor Lake CPU design, but a bootlog of their future Xeon HEDT portfolio, which includes the W9-3495 CPU with 56 cores & 112 threads, has also been spotted. We already know there will be two versions of Intel’s Sapphire Rapids HEDT workstation portfolio: the “Expert” lineup will have up to 56 cores and 112 threads, while the “Mainstream” line will have up to 24 cores and 48 threads.

With a total of 16 Golden Cove cores, 32 threads, and 45 MB of L3 cache, the Xeon W5-3433, a mainstream chip in the family, has already leaked to the public. Now, there is a new component that is undoubtedly a member of the Expert lineup.

The W-series chipsets, which include the Intel Sapphire Rapids Xeon W CPU and W790/W680 chipsets for workstation customers, will take the place of the X-series CPUs and Chipsets. AMD used a similar strategy when it changed the status of its Threadripper CPUs to PRO and restricted them to workstation use

Regarding the recently discovered processor, it is unquestionably a top-tier Intel Sapphire Rapids HEDT SKU. With a base clock speed of 1.80 GHz, the Intel Xeon W9-3495 CPU appears to be an ES sample. It has 112 threads and 56 cores. The CPU should have the same 112.5 MB of L3 cache as the Sapphire Rapids-SP lineup’s top chip, the Xeon Platinum 8490H.

The CPU supports both AVX-512 and AMX instructions, so it will unquestionably provide a significant performance boost in programmes that benefit from those, albeit at the cost of increased power consumption. Additionally, it appears that Intel only has AVX-512 operational on their Workstation components, as opposed to the general consumer platform, which has completely abandoned it.

No information is currently known on the debut date of these CPUs. Raptor Lake CPUs will be available in the Intel Sapphire Rapids Xeon Workstation lineup at launch in October, according to earlier rumours. However, this has not been officially confirmed, and while there have been a few leaks of Raptor Lake CPUs so far, there have been few to none of the HEDT CPU lineup.