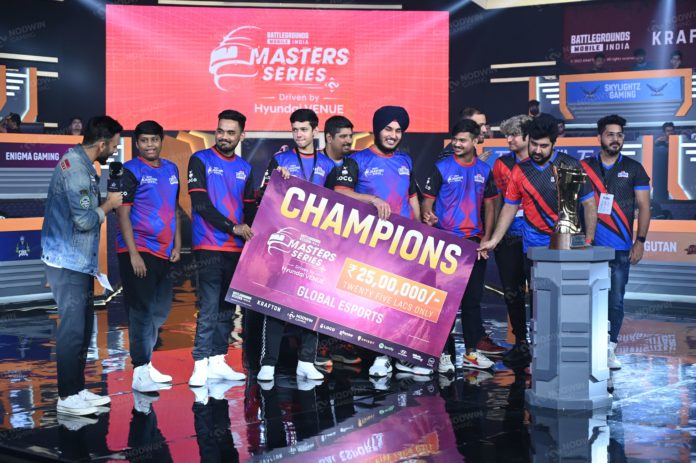 New Delhi: July 20, 2022 – NODWIN Gaming’s three-week-long premier television tournament — the BATTLEGROUNDS MOBILE INDIA (BGMI) Masters Series that was broadcast on Star Sports 2 on primetime starting June 24, has concluded in a grand final event on July 17, 2022. Global Esports was crowned the champion of this series following an edge-of-the-seat match between the top teams like Team GodLike & Orangutan.

The winner was awarded the BGMI Master Series trophy, INR 25 lakh as prize money, and the new Hyundai VENUE was taken home. The tournament had an overall prize pool of INR 1.5 Cr.

The winner was announced after the three-week-long tournament’s exciting and long-drawn five-day grand finale. The tournament finals saw teams give a tough fight and pull all stops to dominate the leaderboard with an eye on the trophy. The season also saw lesser-known teams like team Insane Esports and Chemin Esports excel and make an impression.

“What a series this has been for NODWIN Gaming, for the community and for our partners on the whole! We’ve been able to place esports right in the upper echelons along the likes of several big league traditional sports like cricket, football and tennis. This tournament is a game-changer for every aspiring gamer out there. My heartiest congratulations to Global Esports who’ve raised the bar of professional gaming with their skill set and focus. Each team played like true champions till the very end. I’d also like to thank all our partners Star Sports, Spotify, Swiggy, Loco, Glance Live, Wings, Gillette and Hyundai who instilled their faith in our vision and drove this event to mass success. Onwards and upwards from here,” said Akshat Rathee, Co-Founder and Managing Director, NODWIN Gaming.

KING, an Indian singer, and songwriter performed his latest releases Baazi and Sinner on the sets of BGMI, courtesy of Glance and Warner Music India to get players grooving to his music and pumped up for their next battle. Television host, Jatin Sapru, presented the last two days of the competition.

“Gaming has become an entire culture in itself which is representative of participation in a cultural phenomenon that has reached a scale that you simply cannot ignore. It is no longer super-niche but very much a part of the mass culture. This is one sport where we have looked to partner with NODWIN to build something from the ground up. Here, we have not just acquired the rights. We invested in both resources and efforts.  When we do this, we do it with the ambition of building something that will reach a certain scale. We are delighted that our hypothesis is being proven right that a popular game when converted into a marquee sporting property will attract millions of viewers,” said Sanjog Gupta, Head of Sports, Star & Disney India.

“As a progressive brand, Hyundai shares strong synergies with various Sports across the globe and it gives us immense pleasure to be an integral part of the e-sports bandwagon. We are delighted to be associated with BGMI Masters Series organized by NODWIN Gaming. The new Hyundai VENUE personifies the aspirations of Gen MZ customers, elevating their experience through everyday dynamism, exciting performance and hi-tech features. Being one of the largest automobile manufacturers in India, a large part of our customers belong to the Millennial and Gen Z age group, who draw strong associations with esports and spend significant time engaging in such activities. Realizing their interests and to fuel the passion for E-Sports, we are bringing a Lit extravaganza to this series by presenting the new Hyundai Venue to the winner,” said Virat Khullar, AVP & Group Head, Marketing, Hyundai Motor India.

“Spotify aims to bring the best in audio to gamers, creating experiences wherever they play and however they choose to listen. Our partnership with NODWIN for BGMI Masters Series 2022, is an exciting opportunity to advance that goal in India. Specifically, for the tournament, we have curated the Top Gaming Tracks India playlist for those who wish to get in the zone before a match, and have featured top BGMI gamers in The Mythpat Podcast (a Spotify Original), talking about match strategies and tactics. This is just the start of our partnership with BGMI, stay tuned for more to come!” said Neha Ahuja -Head of Marketing at Spotify.

“We have seen the power of the esports community come alive on Loco yet again, with the BGMI Masters Series alone garnering nearly 100 million views and the finals achieving a new platform record of 2.5 lakh concurrent live viewers. As the pioneer and largest investor in the Indian esports and live game streaming ecosystem, Loco has empowered all stakeholders involved and has provided a strong financial backing for the community to grow. Esports is set out to become the sport of the masses in India and we are proud to provide opportunities for viewers and creators on our platform as we continue to democratize gaming entertainment and turbocharge fan experiences!”, said Ashwin Suresh, Founder, Loco.

“Over the last year, Glance has made significant endeavours to bring premium eSports to users right on the lock screen of their smartphones.  We are delighted to share that over 25 million consumers in India have discovered and watched BGMI masters on Glance. We hope that the combined reach BGMI Masters has achieved through TV and lock screens makes this a watershed moment for esports in India as she aims to become an esports powerhouse, especially ahead of the launch of esports at the next Asian Games,” said Yashashvi Takallapalli, Vice President – Gaming, Glance.

“Swiggy has been looking at interesting ways to engage with the gaming TG. The opportunity with BGMI Masters Series gave us a chance to do that at scale. We have done some interesting integrations during the series such as owning the “Winner Winner Chicken Dinner” segment in addition to having live delivery activations in the studio. We also ran a contest wherein we gave away 100 free Swiggy dinners on a daily basis, through QR code ads that we ran during the course of the series.” said Saurabh Nath, AVP Brand.

Commenting on the finale, Vijay Venkateswaran, Head of Sales and Marketing, Wings said, “The BGMI Masters has drawn to a close and what a journey it has been. Intense seems an understatement. Congratulations to Global Esports. A roller coaster ride if there ever was one. Props to all the teams who have participated and gave their best. It was an entertaining spectacle from the start to finish. Wings is proud to have partnered with NODWIN Gaming to produce such a huge show of talent and skill. We are immensely overjoyed that we are part of a project that celebrates gamers in all its glory. Here’s to more such ventures that push the horizons of gaming.”

The first-ever televised BGMI tournament was a collaboration between NODWIN Gaming and Star Sports. Glance Live and Loco enabled the digital distribution of the tournament. The series was broadcast in Hindi, Tamil and English.

The total prize pool for the tournament was INR 1.5 crore to be distributed among the winning team, the weekly winners and the top performers.

Performance awards for the finals:

1. The Eliminator Award – Most finishes – Goblin from Team Soul

3. The Damager Award – Most Damage – Jonathan from GodLike

4. The Dost Award – Most Assists – Nakul from Global Esports

5. The Saviour Award – Most Revives – Hector from Team Soul

6. The Doctor Award – Most Heals – Destro from Chemin Esports

7. The Tapatap Award – Most Headshots – Goblin from Team Soul

8. The Survivor Award – Most Survival Time – Driger from Orangutan

9. The Motorhead Award – Most Vehicle Distance – Ash from Orangutan

10. The MPV Award – Most Finishes – Jonathan from GodLike

The BGMI Master Series has broken all viewership since it went live, clocking over 1.2 million impressions surpassing the impressions of Australian Open Day 1, French Open Day 1 and UEFA CL Semi-Finals! The series clocked 12.3 million views through the first eight days of broadcast on TV.

The tournament was digitally distributed by the leading live streaming and esports platform, Loco and lock screen app Glance Live. The finals on Loco garnered more than 3.6 million views with peak concurrent live viewers crossing 2.5 Lac while Glance crossed 1.7 million viewers. The tournament was also viewed by over 25 million consumers on their smartphone lock screen with Glance.

Previous articleFIFA 23: Official Reveal Trailer – Everything you need to know about the upcoming game
Next articleCase Toh Banta Hai: Riteish Deshmukh and Varun Sharma are coming with Celebs for a comedy show