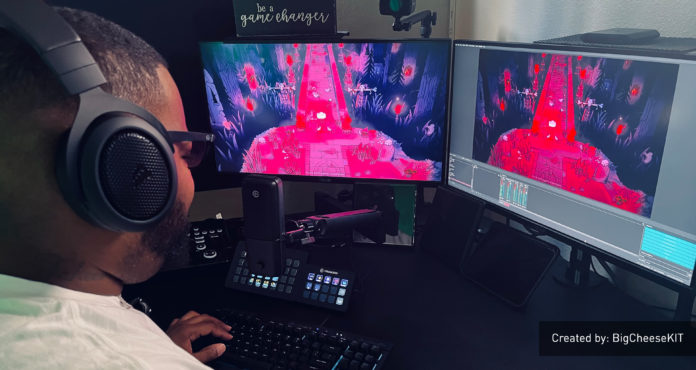 A leader in high-performance gear and systems for gamers, content creators and PC enthusiasts, CORSAIR has integrated NVIDIA Broadcast technologies into its hardware and iCUE software. Similar AI enhancements have also been added to Elgato’s audio and video software, Wave Link and Camera Hub.

Noise removal in Elgato Wave Link is built as a virtual studio technology (VST), enabling users to apply the effect per audio channel, and supported in compatible creative apps such as Adobe Premiere Pro, Audition and Blackmagic DaVinci Resolve.

Broadcast also cancels room echoes, providing dampened, studio-quality acoustics in a wide range of environments without the need to sound-proof walls or ceilings.

CORSAIR’s integration takes a new version of these effects that can separate body sounds. This upgrade adds support to popular capabilities, like muting the friend who forgets to turn on the push-to-talk feature on a video call while they chew their lunch.

AI audio effects are ready to be integrated into nearly the entire lineup of CORSAIR headsets.

These Broadcast features are available on nearly the entire lineup of CORSAIR headsets. Users seeking a premium audio experience should consider headsets like the VOID RGB ELITE WIRELESS with 7.1 surround sound, HS80 RGB WIRELESS with spatial audio or the VIRTUOSO RGB WIRELESS SE.

For Elgato creators, noise removal can now be enabled in the Wave Link app. This makes AI-enhanced audio possible for Wave mic users, plus XLR microphones thanks to the Elgato Wave XLR.

AI-enhanced filters powered by GeForce RTX GPUs offer better edge detection to produce a high-quality visual — much like those produced by a DSLR camera — using just a webcam. Supported effects include blur and replacing the background with a video or still image, eliminating the need for a greenscreen.

Set Up for Streaming Success

Accessing these NVIDIA Broadcast technologies is fast and simple.

If an eligible CORSAIR headset or the ST100 headset stand is recognized by iCUE, it will automatically prompt installation of the NVIDIA Broadcast Audio Effects.

After installation, Broadcast options will appear within iCUE, Wave Link and Camera Hub. Check out the installation instructions and FAQ.

Broadcast features require GeForce RTX GPUs that can be found in the latest NVIDIA Studio laptops and desktops. These purpose-built systems feature vivid color displays, along with blazing-fast memory and storage to boost streams and all creative work.

Pick up an NVIDIA Studio system today to turn streams into dreams.

BigCheeseKIT enjoyed early success as a Golden Joystick award nominee, serving as an ambassador for Twitch and Norton Gaming. He said that the highlight of his career, undoubtedly, was joining T-Pain’s exclusive gaming label, Nappy Boy Gaming.

A natural entertainer, BigCheeseKIT’s presence, gaming knowledge and authenticity dazzle his 60,000+ subscribers. Powered by his GeForce RTX 3080 GPU and live-streaming optimizations from NVIDIA Studio — such as better performance in OBS Studio, BigCheeseKIT has the resources and know-how to host professional streams.

“It’s like having my own television channel, and I’m the host or entertainer,” said the artist.

“Using NVENC with my live streams makes my quality 20x better,” said BigCheeseKIT. “I can definitely see the difference.”

Previous articleThe Girl in the Mirror: Everything We Know About the Supernatural Thriller series
Next articleAcer Wins Prestigious Platinum Status from EcoVadis Sustainability Rating