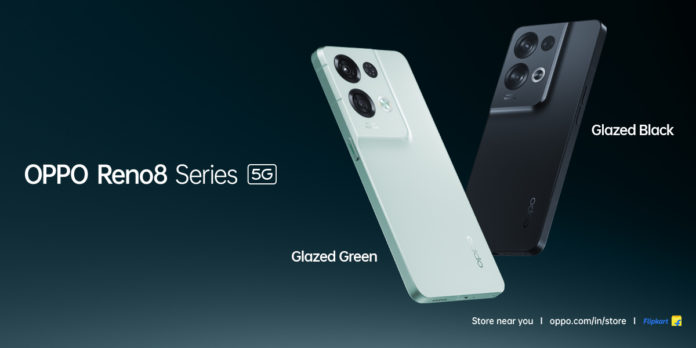 Oppo has finally unveiled the Reno8 Series in the global markets, the latest flagship lineup from the Chinese smartphone maker features the MTK Dimensity 8100 in the top-tier model while the vanilla version has the MTK Dimensity 1300 chip. Both the smartphones are similar when it comes to design with the exception of two changes, let us take a look at the detailed specifications of the Reno8 and the 8 Pro:

The Reno8 features a 6.4″ AMOLED display with an FHD+ resolution and a good 90Hz refresh rate. It lacks HDR10 support for display, it runs on a 4,500mAh battery with support for an 80W SuperVOOC system that charges your device from 0 to 50 in just 11 minutes. The phone can offer up to 2 hours of battery life while gaming with just 5 minutes of charge.

In terms of optics, the phone has a 50MP Sony IMX766 sensor with a 1/1.56″ aperture, an 8MP wide-angle camera, and a 2MP macro shooter. On the front, it has a 32MP selfie shooter with HDR and Auto Focus support.

The smartphone features the MediaTek Dimensity 1300 chip that is based on the 6nm process, it has a CPU with 4 A78 cores and 4 A55 cores. In terms of GPU, it has an older-generation Mali-G77 MC9.

For improved battery efficiency, Oppo has provided the Battery Health Engine option that reduces battery degradation to extend the cell’s life to 1,600 charge/discharge cycles, which amounts to 4 years of daily charging. The device is available in a black and cream color variant. It has been priced at Rs. 39,000 for the base variant.

The Oppo Reno8 Pro runs on the MediaTek Dimensity 8100-Max chipset, it is based on the 5nm process and has four Cortex-A78 cores, four A55 cores, and a Mali-G610 MC6 GPU. For enhanced camera experience, the brand has integrated its custom MariSilicon X chip that offers 18 TOPS of number crunching power and functions in a 20-bit dynamic range.

In terms of display, we see a 6.7″ AMOLED display with support for a resolution of 1080 x 2412 pixels, a refresh rate of 120Hz, and HDR10+ support. PUBG can be run on the Reno8 Pro in 90z refresh rate mode, which is a first for the series and apart from this, the phone downloads software updates as and when they are available in the background. Once downloaded, you will get a hovering button that gives you the option to download it. However, Indian and Japanese markets will not be getting this feature.

The Pro version has the same camera setup as the vanilla version but due to the MariSilicon chip, it offers much better image quality. The primary sensor is a 50MP Sony IMX766 with a 1/1.56″ sensor behind an f/1.8 7P lens with omnidirectional PDAF, dual native ISO, and 12-bit image output. We get two secondary sensors, an 8MP and a 2MP macro. On the front, it has a 32MP selfie shooter.

Apart from this, we get to see a solid dual speaker setup along with an X-axis linear motor for haptic feedback. An extra layer of graphite ensures a cooler user experience and for aesthetics, the device has a glass panel on the rear giving it that ‘oomph’ factor.

The Oppo Reno8 Pro will be available in India from the 19th of July at a starting price of Rs. 46,000 for the base 8GB+256 version. The top-tier variant features 12GB of RAM. The smartphone arrives in Glazed Green and Glazed Black colorways. Both the phones will go on sale via Flipkart and the brand’s official site.