OnePlus Nord 2T vs Nothing Phone (1) Geekbench battle – Who wins? 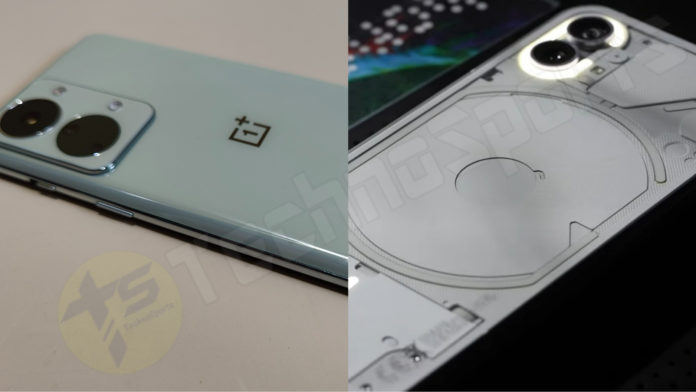 The new Nothing Phone (1) has officially launched at Rs.32k and with bank offers the effective price of the smartphone drops to Rs.30k only. Carl Pei’s new venture has its first smartphone launched and it has kept the pricing very logical along with specs that are enough for any user to cope with in daily life.

However, there’s still his ex-company OnePlus who has also launched the Nord 2T 5G this month itself at the same pricing, so the competition between the two is enormous. While the OnePlus Nord 2T uses the new MediaTek Dimensity 1300, the Nothing Phone (1) houses the Qualcomm Snapdragon 778G Plus.

In a true sense, the competition between OnePlus and Nothing will be interesting to see along with the chipsets of both giants will come face to face in this race. Well, here will not talk about the specs of both smartphones or about their chipsets because for more info check their dedicated articles linked already.

We haven’t got the Nothing Phone (1) though and neither the media has released any benchmark, so we will refer to the leaked Geekbench result we got from last month. While we have ourselves tested Geekbench on the new OnePlus Nord 2T and here are the benchmarks side-by-side:

So as per the leaks previously, the Nothing Phone (1) with the Snapdragon 778G Plus chipset has a maximum clock speed of 2.52GHz for the single-performance core which results to a high 797 points on single-core. However, in multi-core it reaches up to 2803 points, it is respectable for a mid-range device though but this is not an extraordinary result.

So, now compare with the OnePlus Nord 2T 5G that comes with a MediaTek Dimensity 1300, the results actually surprised me. During normal mode, as in without enabling the High Performance mode from settings, the Geekbench results were 510 points in single-core and 2736 points in multi-core, this could be less convincing to a lot of users.

This is done so that the efficiency is improved and during game mode or manually you can set the High Performance mode active, this ensures you get best performance out of your SoC. Now, as you see when you run the Geekbench benchmark, the single-core score reaches up to a staggering 847 points and up to 3058 points in multi-core.

Comparing this with the leaked scores of the Snapdragon 778G Plus in Nothing Phone (1), the scores of the Nord 2T is significantly better. The MediaTek Dimensity 1300 in the OnePlus Nord 2T is 6% faster in single-core and 9% faster in multi-core tasks as well.

This is not a final verdict but a usual battle between both of these new excellent smartphones at mid-range, do let us know what are your thoughts on the same in the comments down below…😉