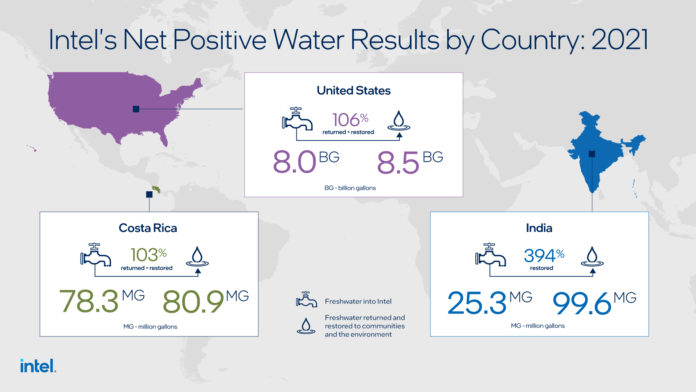 The chip giant, Intel has been present for decades now and for operating the need for water is a must by any company but only a few companies take the initiative to become net positive on water use. Intel, among the few, has done this, and officially they have declared they are now Net Positive Water in 3 Countries including our own country India.

Its operations in the United States, Costa Rica and India are officially net positive on water use. In those countries, Intel restores and returns more freshwater than it takes in. Last year, the company used 16 billion gallons of freshwater, reclaimed water and desalinated water. Internal water management practices resulted in more than 13 billion gallons of water flowing out of Intel, and back to surrounding communities.

Adding in restoration projects, the chip giant is edging toward its global goal of returning and restoring more water than it uses for the community and the environment. And the company’s new sites are being built to its commitment to reach net positive water globally by 2030.

In Bengaluru, India, once known as the “City of Lakes,” significant urban development has contributed to extreme water stress and groundwater depletion. To support Bengaluru’s water resources, the company has funded two water restoration projects that, once fully implemented, will restore more than 100 million gallons each year between Dyavasandra Lake and Lake Nanjapura.