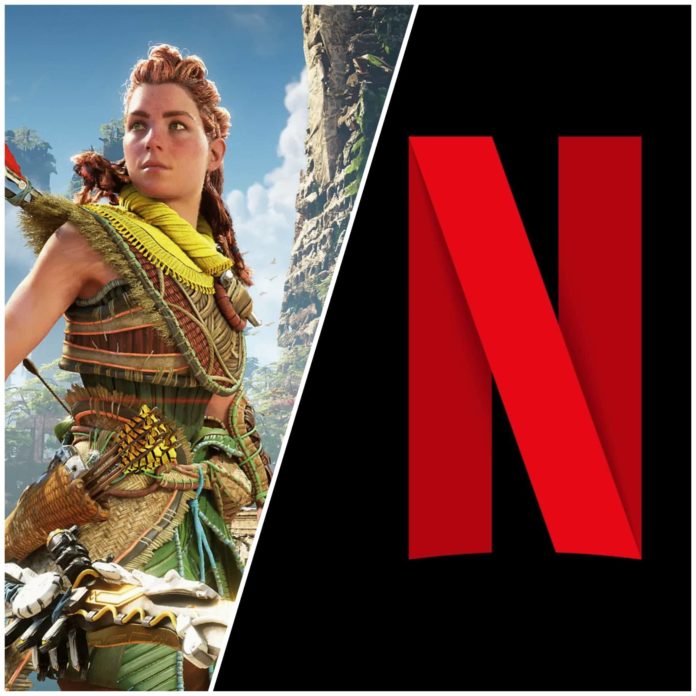 Netflix is like set to bring a plethora of PlayStation gaming series this year with Horizon, and many more. The streamers are already keeping their hands busy on the development of massive gaming adaptations having popular titles, which belong to several publishers like 2K Games, Ubisoft, and many more.

About one or two months ago Netflix unveiled its collaboration with Sony for one kind of TV series adaptation of the Horizon Franchise. If you have played Horizon, you may realize that in recent years Horizon will become one of the most recognizable PlayStation elements.

In this development stage, there are no directors and the cast has been revealed, we just confirmed the two-name Carter Swan and Asad Qizilbash. While the topic Is live-action gaming adaptions then these two names are very important. Along with Uncharted, they have also generated such latest adaptations for The last of Us, Ghost of Tsushima, and Twisted Metal.

Horizon Franchise declared in May 2022 along with PlayStation Productions, and Netflix show. The Dutch developer Guerrilla Games is responsible for developing this legendary game Horizon, they are also known for the name Killzone franchise. Aloy’s story will hit on TV in streaming format.

The Horizon series is an extreme new entrant in the category of the canon of video games. The tale of the original game, Horizon Zero Dawn will feature Aloy in the 31st century, a post-apocalyptic future time while the entire humanity comes infront of the question of survival or existence in the world that’s dominated by AI machines.

The robots are as high-tech as they can take the form of animal life, like dinosaur shapes and sizes to contend with, not all predators are harmful some of them also very peaceful.  The predecessors with advanced technology are always remembered as the “Old Ones”. There are also some other a lot of robotic creatures popular as “machines” that can dominate the Earth.

Now come to the main game in which we will follow Aloy who had grown up without parents and lived separately from the four tribes. As soon as she grows up, and starts to investigate a phenomenon popular as “Derangement” that becomes the reason for the aggressiveness of machines towards humans, and also terrible, and deadlier.

There are four tribes in the game the Nora, the Banuk, the Carja, and also the Oseram:

The Nora: This tribe is a wild hunter-gatherer who used to live in the hills and worship nature like the “All-Mother.”

The Carja: The tribes are mainly desert-dwelling town makers who worship the Sun.

The Banuk: This tribe is really a fantastic clan filled with hunters and shamans who are very strong and live in snowy mountains and other “songs”.

The Oseram:  A tribe of tinkerers and salvagers popular for brewing, metalworking, and holding the talent of warriors.

For the girts time, the game was launched in 2017.

Now, this is the second time Horizon Forbidden West dropped in 2022.

Now, it’s quite difficult, but following the center history of the recent video game adaptations, we don’t think Horizon become faithful to the story of the game. If we draw a comparison about the last Resident Evil: live-action show from Netflix we don’t think there are many to do with the plot of t5he any of the games.

Netflix has not confirmed any of the cast of the show. In the game, Aloy is voiced by Ashly Bur4ch. Lance Reddick, John MacMillan, and John Hopkins along with the notable voiced characters in this game. The most popular and desired choice of the fans for the Aloy is Sadie Sink, Horizon has announced on the same day while Stranger Things (Season 4) was dropped, it also has been amplified with the fact like Sink’s Max is the very exciting and also very memorable scenario as loved by the internet.  For the role, Lyndon Smith has also gas been mentioned.

There is also another suggestion got a lot of face models, that’s the Dutch model, and the actress Hannah Hoekstra.

The Canadian film director Guild confirms that it will start for the title which will run under Horizon 2074 in this late August 2022. They just stated that the production and post-production will close on March 2023.

Netflix has no such release date for the live-action adaptation, Horizon, but if we consider the production will begin in 2022, then we should expect that the first season will take time to drop in early 2024.

Read More: Top 7 Marvel Movies that got the Lowest Rating Ever