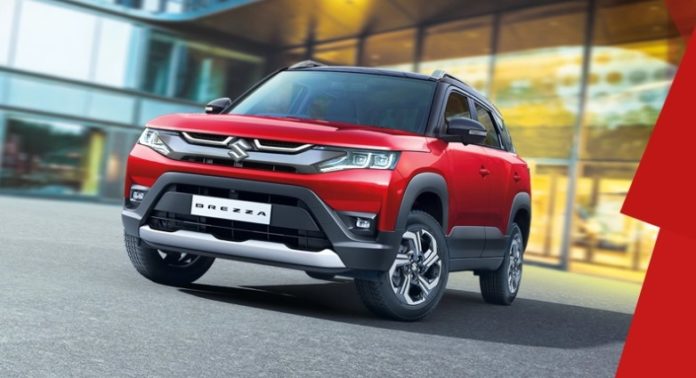 Maruti Suzuki has officially unveiled the 2022 Brezza with a starting price of Rs. 7.99 lakh and it goes up to Rs. 13.96 lakh ex-showroom price in Delhi. The carmaker has already opened the bookings for the car and reportedly already 45,000 units have already been booked pre-launch. The latest iteration of the Brezza notable leaves out the ‘Vitara’ name from its moniker.

The 2022 Brezza arrives with a premium of up to Rs. 2.47 lakh in contrast to its predecessor. The lower variant comes with a lower bump in its price and the base LXI version has become more expensive by a margin of Rs. 15,000. The automatic and manual versions of the car differ by a price of Rs. 1.5 lakh.

The 2022 Brezza has a revamped design with a modern look that makes it classier and bolder. It has a new grille, a much sleeker LED projector with headlights (Twin L-shaped LED DRLs), a redesigned bumper, new allows, and other premium additions around the LED taillights.

The car features a much more rugged look in contrast to its predecessor. This is mainly because of the chunkier body cladding that gives it a dual-tone look on the front and the back. In terms of interiors, the car takes some pointers from the Baleno, the SUV comes with a plush cabin and premium interiors. The car has gone with an all-black theme with multiple features such as follows.

In addition to this, it also has automatic headlamps, cruise control, AC, wipers with rain sensors, and a push-button start-stop option. The Brezza arrives with up to six airbags, ESC, hill hold control (but only for the AT variant), and a 360-degree camera. The safety rating is stellar as it has 4-stars which makes it one of the safest SUVs out there.

The Brezza arrives with a 1.5-liter petrol engine along with mild-hybrid technology. The engine has four cylinders and it has a total power of 103PS, a torque of 137Nm, and transmissions of 5-speed MT and 6-speed AT. In terms of fuel efficiency, the car has a range of 20.15 km/per liter.

The Brezza has a 5-speed manual transmission and a 4-speed torque converter that has been replaced with a new 6-speed unit along with a paddle shifter. The 2022 Brezza will directly compete against the Hyundai Venue, Kia Sonet, Mahindra XUV300, Tata Nexon EV, Renault Kiger, and others. The car is available in a total of nine color variants including three dual-tone shades, they are as follows:

Here is a table with variant-wise pricing:

Why Maruti Suzuki Ends Up Sacrificing on Safety of Its Cars in India?