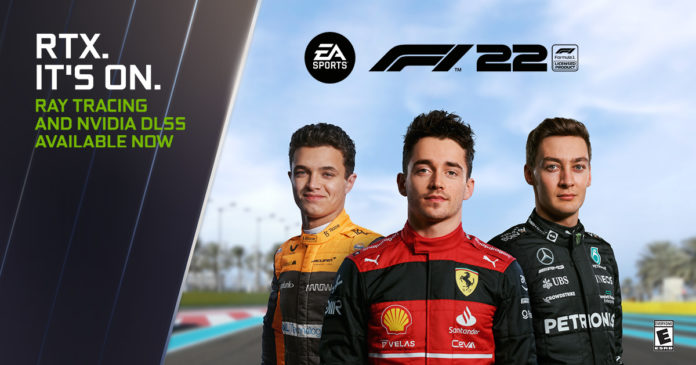 The upcoming F1® 22 is one of the most anticipated games set to launch this week and NVIDIA is ready to partner with Codemasters to bring DLSS to upgrade performance for GeForce gamers. Thanks to a new GeForce Game Ready Driver for F1® 22,  GeForce gamers are ‘Game Ready’ for the latest instalment in Codemasters’ highly-lauded F1® Series, which launched for early access today.

F1® 22 supports multiple ray-traced effects and NVIDIA DLSS, which delivers a performance upgrade of more than 2X. With performance more than doubling with DLSS enabled, gamers with GeForce RTX 3060 Ti GPUs and above can achieve frame rates of 60 FPS or higher at 4K with max settings and every ray-traced effect enabled in F1Ⓡ 22.

With the performance provided by NVIDIA DLSS, GeForce RTX gamers will have the headroom to enable F1Ⓡ 22’s immersive ray-traced effects without sacrificing image quality.

Support for NVIDIA DLSS and ray tracing in the game means a GeForce RTX-based graphics card, desktop PC or laptop PC will deliver the ultimate F1® 22 experience, with the highest levels of performance, the smoothest gameplay, and the highest-fidelity graphics.

This driver also gets gamers ‘Game Ready’ for Loopmancer, the highly anticipated rogue-lite-platformer action game launching on July 13, 2022. The game will launch with support for NVIDIA DLSS and ray-traced reflections, giving GeForce RTX gamers the best possible experience in the game.

RTX Momentum Is Stronger Than Ever