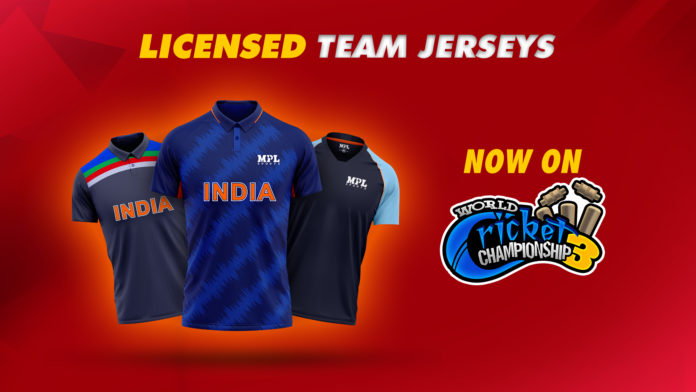 India, 23rd June 2022: World’s number one mobile cricket game franchise, World Cricket Championship (WCC), has released its latest update with new offerings on the game platform for its users. WCC3 has introduced a licensed digital avatar of jerseys for its users in association with MPL sports.

Favourite Jerseys like the Billion Cheers Jersey and the Retro and Training jerseys will be made available for the in-game players of the Indian team. Additionally, WCC3 has now added renowned cricket commentator, Tariq Saeed, marking the introduction of Urdu commentary in the game.

The licensed digital version of the jersey is a replica of the original which carries’ fans’ chants and cheers from iconic past matches, transformed into unique soundwave patterns. It’s a unique pattern jersey, where Indian sports fans have been memorialized on it. The shirt aptly called the ‘Billion Cheers Jersey’, honors fans’ unwavering support. The jersey comes in shades of Prussian blue and royal blue offering a bold and distinct look befitting champions.

Said Nextwave Multimedia, Co-Founder and CEO, P.R. Rajendran “With 240 million-plus users, this seems like a good opportunity to add value to our fans and the cricket community out there. We are glad to work with MPL Sports to make available the digital version of popular jerseys including the Billion Cheers and Retro among others for the in-game players. With the newly introduced Urdu language commentary, we hope to give users a treat for this season.”

Shobhit Gupta, Head of MPL Sports said, “We are excited to team up with World Cricket Championship 3, a game that is loved and played by millions of sports fans across the country. The MPL Sports Billion Cheers jersey is one of the most recognized and coveted pieces of sports apparel today. Now it will be available in an exciting digital avatar that gamers can use to flaunt their love for the sport.”

WCC3 is one of the only ‘Made in India’ esports titles and has been featured in prominent esports tournaments in the country including Penta Amateur League, Redbull M.E.O., and more. The game has also won the Indian Game Developers Conference’s ‘Studio Game of the Year’ award and Google Play Store’s ‘Users Choice’ award in 2020. WCC partners with MPL Sports to pay homage to countless cricket fans across the globe.