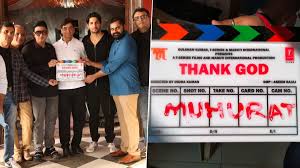 Thank God is the next movie by Ajay Devgn which is going to release this Diwali. On Friday, T-Series made the announcement of the new movie named Thank God starring Ajay Devgn. The movie is going to be directed by Indra Kumar, the film also stars Sidharth Malhotra and Rakul Preet Singh.

The movie’s release date has been fixed for this Diwali, which also reflects a direct competition with Akshay Kumar’s new movie named Ram Setu which is also going to be released on this Diwali. Both Akshay and Ajay have not gained much affection towards their movie during this year so, both of them are looking forward to a blockbuster record at the box office.

Thank God: Ajay Devgn’s new movie; All details about it

The movie Thank God is going to be the third collaboration of Ajay Devgn with Rakul. Previously both of them have worked on De De Pyaar DE and Runway 34. Along with Sidharth Malhotra, he is probably be seen in the upcoming Amazon Prime Video series Indian Police Force for the very time, which is set within Rohit Shetty’s cop universe, where Ajay plays Singham and this movie is going to be the second one with Sidharth Malhotra.

Recently, Ajay Devgn released a series on Disney Plus Hotstar named Rudra. the series is based on the BBC detective show Luther. He is also best known for the intense characters on the big screen as well as on the small screen. He also appears occasionally in comedy parts. Some of the comedy films are Golmaal, Total Dhamaal, and Indra Kumar. Ajay Devgn’s one of the most liked character is Singham, on which he has been seen repeatedly. Recently, he will also be seen in a cameo of Rohit Shetty’s Cirkus, starring Ranveer Singh.

Indra Kumar is best known for the Dhamaal series, as well as the Masti films. He worked with Ajay on the first Masti film, and Ishq.

Ajay’s latest release is Runway 34 which has made a quite impressive box office record, while he has appeared in extended cameos in the two blockbuster movies named RRR and Gangubai Kathiawadi. The actor has a bucket full of lists for the coming period, where a sports drama named Maidaan has got delayed for a longer time and the most awaited movie Drishyam 2 is on its way.

Read- Tanaav: Fauda’s Indian adaptation is all set to release on an OTT platform

Previous articleAMD Ryzen 7000 Desktops to debut in September 2022
Next articleTwitter: Elon Musk plans to Involve more into the future development of Twitter