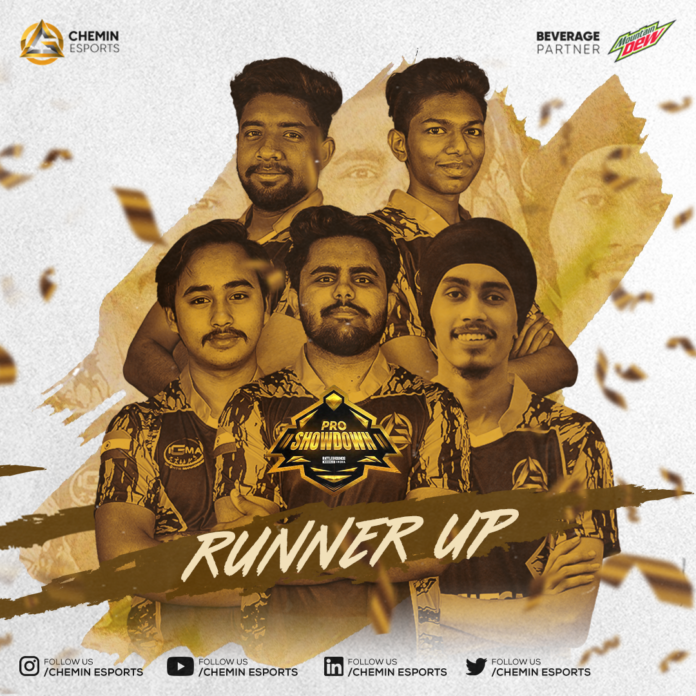 New Delhi, June 17, 2022: Chemin Esports, a leading Esports and talent Incubator that supports budding esports athletes and aspiring content creators in the field of gaming, continued its winning streak with its BGMI team featuring amongst the top three at the TEC BGMI Invitational Season 4 andUpthrust Esports Pro Showdown Season 1, Chemin finished at the third and the second position in the Grand Finals of respective tournaments.

Chemin gave a brilliant performance in the Grand Finals of the Pro Showdown by accumulating a total of 414 points after playing 36 matches which included 6 chicken dinner games. Parth Garg (CES DeltaPG) finished at the tied 2nd Position in the MVP List with 60 Finishes.

This was followed by another impressive performance by the team in the TEC Invitational Season 4 where Chemin accumulated 109 points after playing 10 matches in the Grand Finals and securing back to back podium finishes in a day. Parth Garg (CES Deltapg) & Justin Nadar (CES Justin) finished at the tied 2nd Position in the MVP List with 17 Finishes each.

Speaking on his team’s win, Chemin’s Founder and Director, Ishan Varma, said, “Our focus and training is showing excellent results and I am happy that our team is continuing its winning run. For us, it’s important to stay on the top and be the best in the industry and it gives me great satisfaction that our team is consistently featuring right at the top. While Esports is gaining attention and getting more serious, I wish to see my team to go live on mainstream sports television channels.”

TEC BGMI Invitational Season 4 was a 6 days tournament with a prize pool of INR 15 Lakhs. 32 teams were invited for this tournament.

While Upthrust Esports Pro Showdown was a 13 days tournament with a prize pool of INR 10 Lakhs. 18 teams were invited for this tournament.