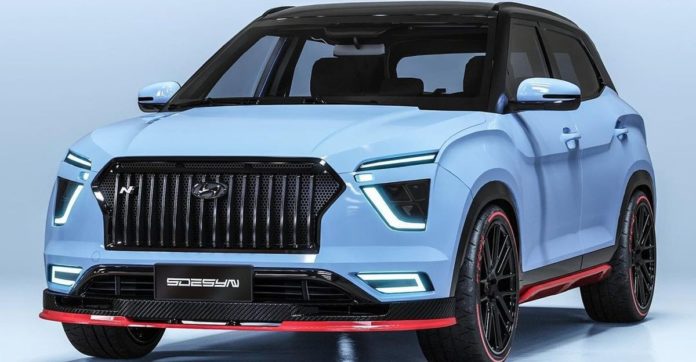 Hyundai has launched the new Creta N Line SUV. In recent weeks, the sportier version of the popular Creta has been teased, and images of the SUV’s near-production shape have surfaced.

The Creta N Line, like the rest of the Hyundai N Line portfolio around the world, receives distinctive design touches as well as minor mechanical improvements on the inside and exterior. A new triangular fog light housing and a much taller front bumper with a wider air inlet have been added to the SUV. On the grille, Tucson-style inlays are coated in dark chrome.

The gap between the grille and the headlamps is black chromed as well, making the grille appear larger.

The Hyundai N Line badge is prominently displayed on the grille of the SUV,  and the Creta’s full LED headlamps appear to be the same as the ordinary Creta’s

The Creta N Line’s interior features conspicuous badging on the seats, red stitching on the fabric, and an N Line-themed gear knob and steering wheel, among other alterations.

The Creta N Line is powered by a 1.0-liter turbo petrol engine with 120 horsepower, which is the entry-level engine in several overseas countries such as South America. An alternative engine is the 2.0-liter NA petrol engine. The Hyundai Verna and i20, as well as the Venue (which is due for a facelift soon), employ the 1.0-liter petrol engine, while the Hyundai Alcazar SUV uses the 2.0-liter engine.

The Venue, according to insiders, would be the next Hyundai N Line vehicle to be launched in India later this month. It’s a safe bet that the Creta N Line is also on its way. The Creta N Line will fight directly in India with the Kia Seltos GT-line and higher-end variants of other midsize SUVs like the Tata Harrier and MG Hector, among others.

Meanwhile, the Hyundai Creta will face stiff competition from not one, but two new midsize SUVs due to arrive this year, with the Toyota counterpart set to debut on July 1, 2022. In addition to the Venue makeover expected next month, Hyundai will debut the Tucson SUV and the domestically made Ioniq 5 EV in India in the coming months.