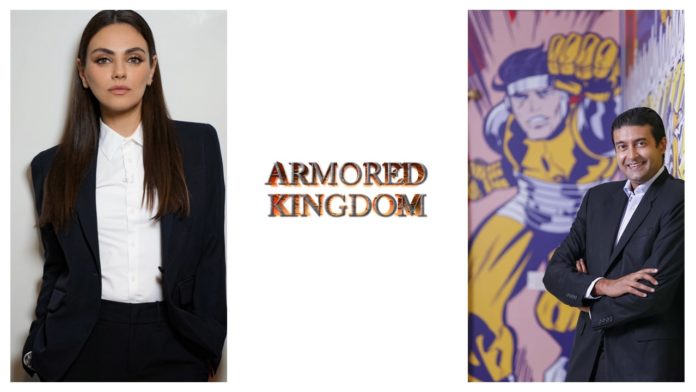 Armored Kingdom ~ Fantasy/Sci-Fi Property to Launch Across Comics, Games and Animation with a Limited Edition Free NFT Comic Mint Available For 7 Days Only ~

Devarajan is the Founder of Graphic India, one of Asia’s leading comic, animation and creative studios, which will develop and produce the visual universe of the Armored Kingdom across the various media platforms. The Company will also help bring the property to the rising Asian and Indian web3 gaming community. Graphic India has previously launched some of the biggest NFT drops based on Indian-themed content, leading the regional Web3 character entertainment and metaverse movement.

This will be the first comic and game championed by Kunis, an avid TCG/MMO gamer, who has previously launched a number of projects in the Web3 animation space. “I lost a good part of my youth to gaming, from World of WarCraft to Settlers of Catan. The moment I dove into Web3, I saw the opportunity to create an immersive universe where blockchain technology deepens the gaming experience and makes it more personal and immersive for every fan. Armored Kingdom will allow gamers to relate to their characters and gear in a revolutionary way, and we can’t wait to share more of that with you very soon” commented Kunis.

“Armored Kingdom has all the elements of a great fantasy meets sci-fi story that will take a global audience into a place of wonder,” commented Devarajan. “At Graphic India, our mission is to partner with the greatest creators and technologies in the world to innovate the future of storytelling across Web3 and the metaverse. Mila Kunis has been an early pioneer and leader in this space and it’s an incredible honor to collaborate with her. Armored Kingdom will push Web3 technology further than ever before, so we’ve turned to NEAR to help us make it a reality. Their expertise with community management, championing of the creative sector, and its carbon-neutral-user-friendly development platform won us over.”

Founded with Lindsey McInerney and Lisa Sterbakov, Armored Kingdom is built on NEAR – a carbon-neutral, community-driven blockchain. The sci-fi/fantasy universe, developed by creator Hugh Sterbakov and writer/game designer Brian Turner heralds a new evolution of media franchise, blending technology and narrative worldbuilding to create an immersive universe, reinventing the relationship between fans and fantasy.

A five-issue series of both digital and physical comics will be the first asset launched in the collection, bringing people inside the world of Armored Kingdom and setting the stage for the digital card game launching later this year.

Armored Kingdom follows several tribes of warring dynasties as they battle for power with the aid of Armorite, powerful weapons crafted by a long-lost advanced civilization. With each new artifact unearthed, the balance of power shifts – but even as the war rages, a greater threat lurks in the shadows.

“The mythology of Armored Kingdom chronicled in the digital comics will be further explored in the trading card game, which will be phase two for the franchise,” said McInerney. “Carefully marrying the narrative and gameplay, and using both to further explore the world, will keep the storyline evergreen and ever-developing – and above all else, fun.”

Leveraging NEAR’s technology, the franchise will introduce a new chapter of entertainment innovation to a global fanbase, combining narrative storytelling and gameplay with cutting-edge blockchain technology in a revolutionary fashion.

Marieke Flament, CEO of the NEAR Foundation, the Swiss non-profit that oversees the governance and development of the NEAR protocol, commented: “We are excited to support the launch of Armored Kingdom and the storytelling opportunities it will bring to fans. NEAR is a perfect blockchain for an entertainment franchise as it can support various platforms, which is crucial for multiverse experiences across different mediums. Our focus on ease of use also allows developers to deliver intuitive experiences for a large fan base.”

Armored Kingdom chronicles the medieval dynasties of Armoria, a world named after a powerful and mysterious metal, Armorite. No one has been able to mine Armorite—no one since the Ancestors, a vanished dynasty who used it to forge magical weapons now scattered across the lands. Each of these weapons has the ability to change the balance of power among the warring dynasties, which include humans; the jungle-dwelling creatures of the Kingdom of the Horn; the amphibious Costraca; and the Warri, a society of secretive assassins.