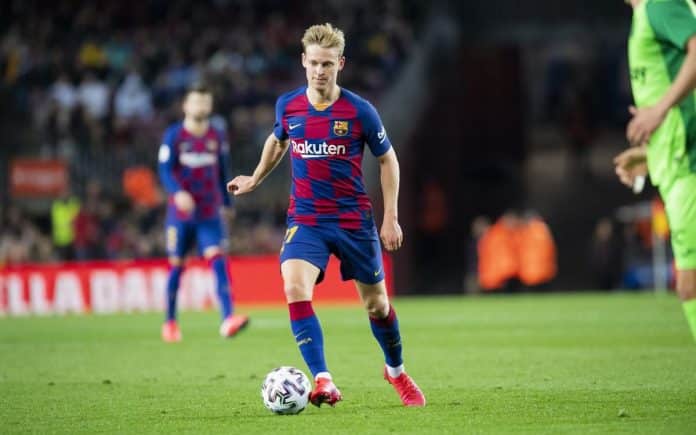 Recently, Fabrizio Romano has confirmed that Manchester United’s opening bid for Frenkie de Jong has been rejected by his club Barcelona. The report suggests that the Red Devils’ put a bid of €60m plus €10m add-ons for the Dutch footballer, but the Spanish club hasn’t agreed to go on with this proposal.

The latest report from Fabrizio Romano has also claimed that both the clubs are still in contact. It seems like we can see more drama in this segment soon.

Ahead of the new season, struggling Man United are looking for some quality players under the manager Erik ten Hag. According to media reports, one of their key targets is the 25-year-old Netherlands central-midfielder Frenkie de Jong, who currently serves Barcelona.

De Jong’s present contract with Barcelona will run till June 2026. While it is reported that the Dutch footballer wants to participate in the UEFA Champions League, he hasn’t opened up his desire yet about the club’s future.

On the other hand, Barcelona and the manager Xavi want to keep De Jong in the squad. However, due to their latest financial condition, the Spanish club can consider the Dutch footballer’s transfer if they receive some strong bids.

Many believe that De Jong’s Man United signing is very much possible due to Erik ten Hag’s arrival. De Jong played under this Dutch coach in Ajax, where he highly impressed the European clubs. Barcelona finally signed De Jong in the 2019 summer after observing his strong performances for Ajax.

Even before that singing, Man United and their Premier League arch-rivals Manchester City and the top French club Paris Saint-Germain (PSG) also reportedly showed their interest in this Dutch footballer.

In the meantime, ESPN has reported that Barcelona will consider the offers for De Jong if they receive worth €100 million.