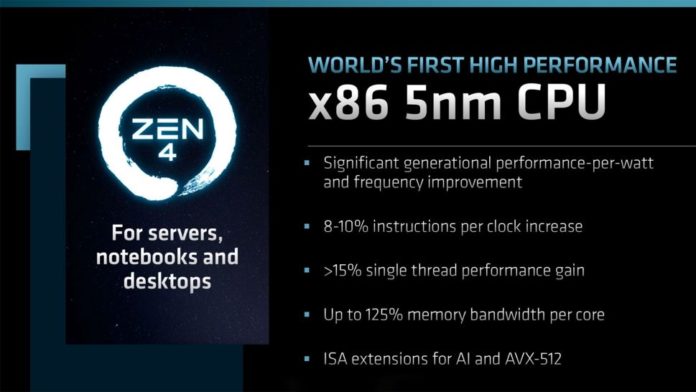 At Computex 2022, AMD CEO Lisa Su teased the Ryzen 7000 CPUs with a Zen 4 teaser, but the announcement that the processors will only offer an ‘only’ >15 per cent gain in single-threaded performance left several enthusiasts disappointed. During Financial Analyst Day 2022, AMD clarified that the Zen 4 processors will have an improvement in IPC of 8 to 10%, with bigger benefits in single-threaded performance in some workloads.

AMD also stated that Zen 4 processors would enhance performance per watt by more than 25% and overall performance by more than 35%. The Zen 4 processors will also have considerable clock frequency enhancements, which isn’t surprising given that the company has already demonstrated a Ryzen 7000 processor that runs at 5.5 GHz on all cores (albeit not with all cores under load). The memory bandwidth per core on Zen 4 will be increased by up to 25%.

When you factor in the company’s claims of considerable frequency enhancements for the 5nm Zen 4 CPUs, we should see much larger benefits in single-threaded performance in various applications than the baseline 15% gain — remember, >15 per cent is a “more than” value.

The 16-core 32-thread Ryzen 7000 desktop PC processor was pitted against the 16-core Zen 3 Ryzen 9 5950X in this test. Keep in mind that the slide is a little misleading because it employs a non-zero axis that increases the gain.

The Zen 4 processors will also allow up to 25% greater memory capacity per core, thanks to a combination of the switch to DDR5 and possibly expanded pathways in the silicon to give more bandwidth to the cores. The bandwidth-hungry AVX-512 enhancements that AMD added for Zen 4 will benefit greatly from this.