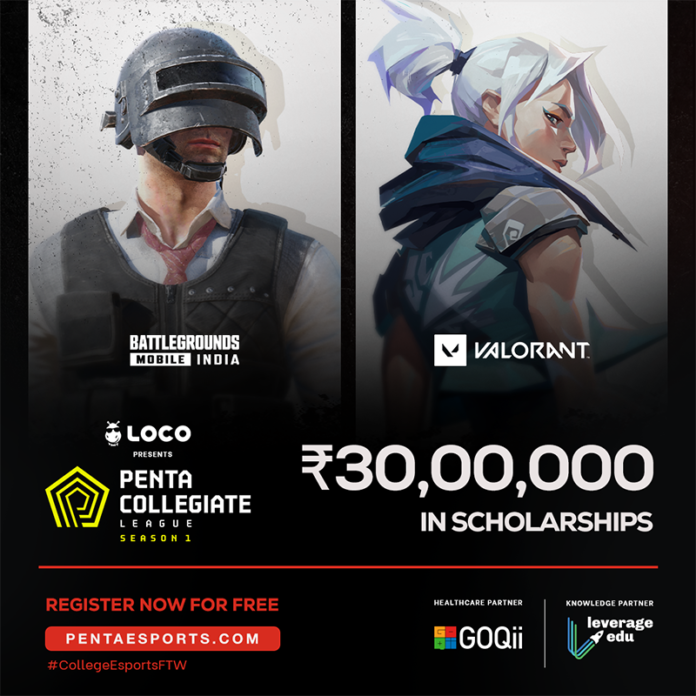 Gaming and esports company, Penta Esports has announced the launch of its latest IP, the ‘Penta Collegiate League’ presented by Loco, for colleges and universities across India. The tournaments conducted under this league will be streamed exclusively on Loco’s app and web (loco. gg). Other partners of this league include ‘Leverage Edu’ as the study abroad partner and ‘GOQii’ as the healthcare partner.

The first season of the ‘Penta Collegiate League’ will feature two esports titles, Valorant on PC and Battlegrounds Mobile India (BGMI) on mobile with ₹30,00,000 to be awarded in scholarships.

Speaking about the idea behind this new esports league, Penta Esports Founder and CEO, Anurag Khurana said, “Our major focus is to provide opportunities to the budding esports athletes at the grassroot level. Esports is rapidly gaining popularity as a viable path for many and we want to provide a platform similar to conventional sports to aspiring esports athletes. The scholarship aims to help esports athletes in their endeavors.”

Commenting on the partnership, Founder, Loco, Ashwin Suresh, said, “Game streaming is no longer looked upon as just a casual hobby. As more gamers become creators and start streaming, and new tournament organizers create more events, newer audiences are drawn to watch this content. The increased viewership will eventually lead to an increase in revenue for the overall ecosystem. As a pioneer of this industry, we’re excited to see it expand and we’re playing an active role in helping it grow. With our association with the ‘Penta Collegiate League’, we aim to support budding streamers and kickstart their esports careers.”

The playoffs of both qualifiers and the finale of the first season will be broadcast live exclusively on Penta Esports’ channel on Loco. Students can participate in the tournament by visiting pentaesports.com and completing the registration process.

The complete details of the league are available on Penta Esports’ platform, pentaesports.com. The platform is a one-stop destination for all things Penta, including match schedules, match results, VODs of tournaments and leagues, content, news, announcements, and much more.

Founded by industry veterans Anurag Khurana, Kiran Noojibail and Akshay Paul, Penta Esports aims to disrupt the ecosystem in India with a holistic approach towards the sector, including leagues, tournaments, content and much more.

Previous articleTop 10 most valuable English footballers in 2022
Next articleSamsung’s Consumer Loyalty Program ‘Samsung Home’ is Back on Amazon & Flipkart, Avail Exciting Offers on Every Purchase