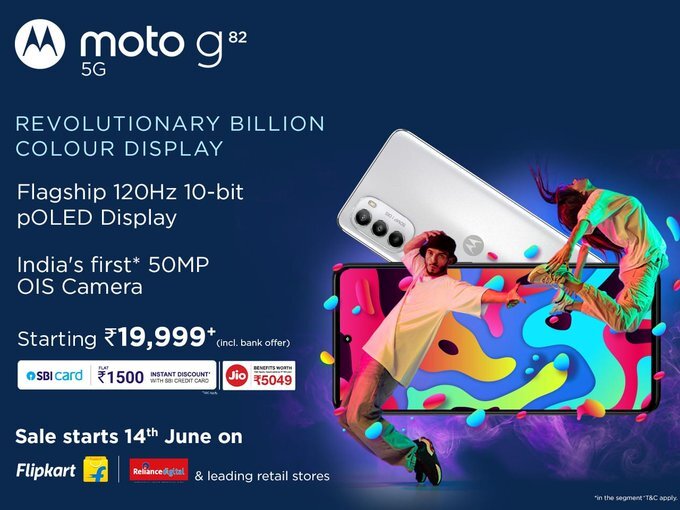 Motorola has launched yet another powerful mid-range smartphone, the Moto G82 5G in India which arrives with some amazing features such as an AMOLED display with a high refresh rate, a triple camera setup, and is powered by an octa-core Snapdragon chip.

The smartphone is the lightest amongst its competitors weighing in at just 173 grams. It is 7.99mm thick, let us take a detailed look at the specifications of this device.

In terms of optics, we see a triple camera setup on the rear with a 50MP primary shooter that has an aperture of f/1.7 with Optical Image Stabilization (OIS), an 8MP ultra-wide angle shooter that also works as a depth sensor, and finally a 2MP macro lens. On the front, there is a 16MP shooter with an f/2.2 lens.

The device has 128GB of UFS storage with support for a microSD card that will bump the storage up all the way to 1TB. In terms of connectivity options, the Moto G82 5G supports 5G,4G LTE, WiFi 802.11ac, Bluetooth v5.1, GPS/A-GPS, NFC support, USB Type-C port, and a 3.5mm audio jack. Coming to the sensors, the smartphone has an accelerometer, an ambient light sensor, a gyroscope, a magnetometer, and a proximity sensor.

For biometrics, the device has a side-mounted fingerprint scanner. In addition to this, there is a dual stereo speaker setup that is backed by Dolby Atmos and two mics. Motorola has integrated a massive 5,000mAh battery with support for 30W TurboPower charging.

The Moto G82 5G is available in Meteorite Gray and White Lily colors and arrives in two versions, a 6GB RAM+128GB version and an 8GB+128GB version. The former cost 21,499 INR and the latter cost 22,999 INR. The smartphone will go on sale via Flipkart, Reliance Digital, and other select retailers. The first sale will be on the 14th of June at 12 PM. Share your thoughts on Motorola’s latest offering! Is the brand still the king of budget devices as it once was?