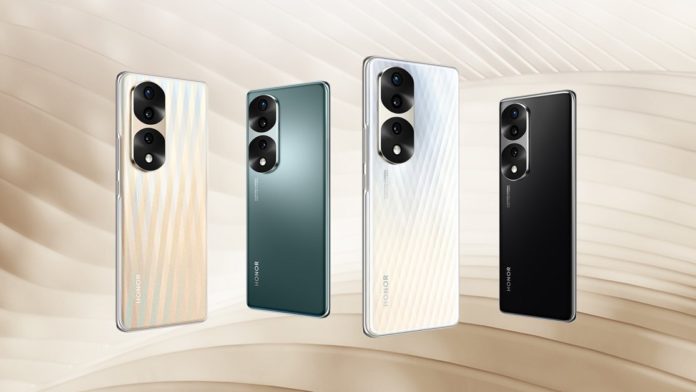 Honor has launched the 70 Series in China today, this lineup has three devices, the Honor 70, the 70 Pro, and the 70 Pro Plus. The vanilla version is the successor to the Honor 60 that launched last year. It carries multiple updates over the previous device. Let us take a detailed look at the specifications of all the phones.

The Honor 70 arrives with a 6.67″ OLED curved screen display made by BOE with an FHD+ resolution. It has a centrally placed punch-hole cutout, a 10-bit panel, and a refresh rate of 120Hz. The phone arrives with an integrated fingerprint scanner for biometrics, it has two camera rings on the rear within which the first houses two sensors and the second one houses a lens along with an LED flash.

In terms of optics, the phone has a triple camera setup on the rear with a 54MP Sony IMX800 primary sensor, a 50MP wide-angle sensor, and a 2MP depth sensor. On the front, we get a 32MP shooter.

The Honor 70 is powered by the Snapdragon 778G+ chip that has been paired with 12GB RAM and 256GB storage, it is juiced by a 4,800mAh battery with support for 66W fast charging. In terms of connectivity options, the phone supports a USB Type-C port, WiFi connectivity, Bluetooth v5.2, 5G support, and NFC.

The Honor 70 Pro and Pro Plus arrive with the BOE-manufactured 10-bit OLED displays that have a refresh rate of 120Hz. The phones have a 6.78″ display with the Pro version featuring an FHD+ resolution while the Pro Plus version has a better QHD+ display with LTPO technology.

Both the phones arrive with a curved display and an integrated fingerprint scanner in the display for biometrics. The phones sport a centrally aligned punch hole camera sensor. In the optics department, both the Pro versions feature a pull-shaped rectangular camera module on the rear that protrudes. The primary sensor is a 54MP Sony IMX800 on the Pro version while the Pro Plus version flaunts a 50MP Sony IMX800 sensor. Both phones have a 50MP wide-angle shooter along with an 8MP telephoto lens with OIS support. On the front, we see a 50MP selfie shooter.

Both the phones arrive with a 4,600mAhbattery along with 100W fast charging. In terms of connectivity, the phones support a USB Type-C port, WiFi support, Bluetooth v5.2 support, and 5G connectivity. The phones run on MagicUI 6.1 based on Android 12 OS.