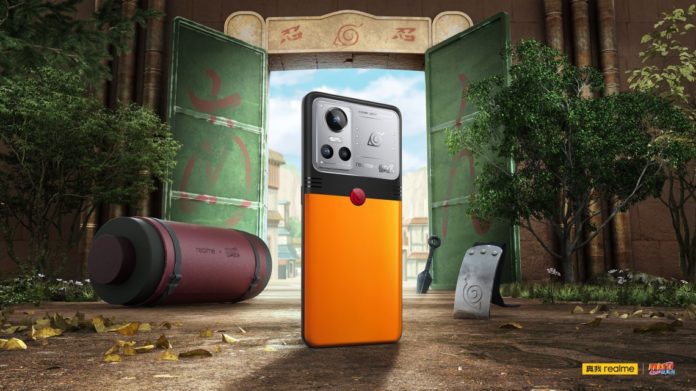 Now talking about the design of the smartphone, we can see the classic orange and black colour combination at the back of the smartphone with a touch of silver-steel finish around the rear camera. This design resembles the signature clothing style of Naruto, who is the main protagonist of the famous Japanese series “Naruto”.

At the middle point of the orange and black colour we can see the clan logo of “Uzumaki” which can be seen on the back of Naruto’s jacket. On the silver-steel portion, we can see the logo of “Leaf Village”, the Ninja village from which Naruto belongs. There are a ton of resemblance to the smartphone that makes it a true attraction for all Naruto fans.

The smartphone will likely have Naruto inspired theme, which means the app icons and wallpaper will give you all Naruto vibes.

The Realme GT Neo 3 Naruto Edition features a 6.7″ Full HD+ 1080 x 2412 pixel display with a refresh rate of 120Hz, a touch sampling rate of 1,000Hz, and HDR10+, and DC dimming support. The device has a display processor that is used to improve the smoothness of the picture, and it also consumed lesser power.

The Realme GT Neo 3 Naruto Edition has the stainless tell vapor cooling technology for heat dissipation. As mentioned above, it is powered by the MediaTek Dimensity 8100 chip that has been paired with 12GB LPDDR5 RAM.

In the optics department, the phone has a triple camera setup on the rear with a 50MP Sony IMX766 primary sensor with OIS and EIS, an 8MP ultrawide angles sensor, and a 2MP macro sensor. On the front, it has a 16MP selfie shooter.