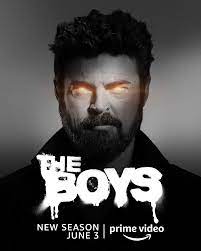 The Boys is a superhero project, developed and directed by Eric Kripke for Amazon Prime Video. Based on the comic books series of the same name, the fact that the show is all set to stream its third season is exciting news for its fans. With numerous hints, teasers, and speculations around what’s going to happen in the new season is already doing the rounds, Eric has shared a major revelation about the season for the eagerly waiting viewers.

We all know that ‘The Boys’ has never shied away from going crazy with the blood, gore, and exploding heads and bodies. Confirming season three is not going to be any different, he gives a sneak into what’s new this time that is going to blow everyone’s mind:

“It’s always the frosting on the cake…If we are spending three weeks breaking an episode, we spend two-and-a-half weeks banging down on character, plot, and emotion. Then, only when all the painful work is done, do we take a break – it’s almost like a wine spritzer – and take a couple of days to say, ‘Now, let’s all think of the craziest s*#t we can do to lay in on top of the hard work we had already done.'”

If the first fifteen minutes are going to be crazy, we can only imagine what the entire season has in store for us. Whatever it is, the fans are ready for Vought’s specific brand of madness. With new Super-villains, like the original Payback team with Soldier Boy and Gunpowder, and with plotlines like finding out about Vought International’s history and Butcher getting his own superpowers, we have a lot of intense drama happening this time around.

The new season of The Boys is having an episodic release starting from June 3, 2022, exclusively on Amazon Prime Video. You can check out the first two seasons that are available on the platform. Why not go down the memory lane, so that you are braced enough for a thrilling future?

Read- Panchayat Season 3 is all set to release soon

Previous articleBallon d’Or 2022: Nominees will be revealed on 12th August as the ceremony will take place on 17th October
Next articleCorsair’s first gaming laptop features AMD processors and a Touch Bar

“The Boys (Season 3)”: The New Poster giving hints to the Major Change For Butcher